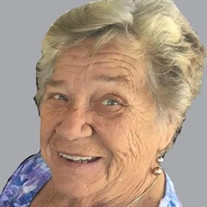 Marion J. Karas, 84, of Stamford, CT and Naples, FL, peacefully joined her late husband, Frank M. Karas, in eternal rest on July 18, 2021. She was born in Stamford, CT on October 22, 1936 and was the daughter of the late Stanley and Sophie (Wozniak) Mrus. Born and raised in Stamford, CT, Marion was a graduate of the Sacred Heart Academy. She married the love of her life, the late Frank M. Karas in 1956. The couple enjoyed living in Germany, while he served in the military, then moved to Boston upon his discharge and eventually settled back in CT. Marion spent the majority of her early life raising their five children. She loved spending time with family and friends boating on the Long Island Sound, skiing in Vermont and traveling with Frank. She was an avid bowler, serving as the President of the Women’s Bowling Association, and holding a 200+ average for multiple seasons. Marion traveled to bowl in amateur tournaments throughout the United States. Later in life, her bowling skills were used on the bocce courts at Scalzi Park. A devout Catholic, Marion shared her singing voice as part of the choir at Holy Name of Jesus Church. Once her children were grown, she continued her education and earned a Certificate of Religious Education from Sacred Heart University, this gave her the opportunity to become the Director of Religious Education at the church. Marion also learned to play golf, a sport that she and her husband Frank enjoyed playing together on courses in Connecticut and Florida. She was so passionate about the sport that became a beloved member of both the Hubbard Heights (where she also served as President) and Sterling Farms Women Golf Associations. Marion is survived by her children Linda (Robert) Demers, Dona (John) Romano, Judy (Derek) Phillips, Gregg Karas and Gwen (Steve) Comatis; nine grandchildren she adored, Michelle, Kevin, Brian, Jeffrey, Nicole, Taylor, Grace, Chase and Sawyer; a sister-in-law Irene Mrus; and by many cherished nieces and nephews. She was predeceased by her husband and parents, an infant son, Michael, as well as by her brothers, John, Stanley (and wife Elaine) and Robert Mrus. Her family will receive friends and relatives on Monday, July 26th from 4pm - 8pm at the Bosak Funeral Home, 453 Shippan Avenue, in Stamford, CT. A Mass of Christian burial will be held at 10 am on Tuesday, July 27th at the Holy Name of Jesus Church, 369 Washington Blvd., Stamford, CT. Interment will follow at St. John Cemetery, in Darien, CT. In lieu of flowers, please consider making a donation in Marion’s memory to: Catholic Charities of Fairfield County, 238 Jewett Avenue, Bridgeport, CT 06606, www.ccfairfield.org/donate or ALSAC/St. Jude Children’s Research Hospital, 501 St. Jude Place, Memphis, TN 38105, www.stjude.org/donate For the safety of all those attending her funeral services, please wear face coverings and maintain social distancing. To leave an expression of sympathy for Marion’s family online, you may sign the guestbook at www.bosakfuneralhome.com or visit the funeral home Facebook page at www.facebook.com/bosakfuneralhome.

Marion J. Karas, 84, of Stamford, CT and Naples, FL, peacefully joined her late husband, Frank M. Karas, in eternal rest on July 18, 2021. She was born in Stamford, CT on October 22, 1936 and was the daughter of the late Stanley and Sophie (Wozniak)... View Obituary & Service Information

The family of Marion J. Karas created this Life Tributes page to make it easy to share your memories.