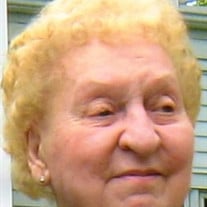 Mary K. Brzoska, a lifelong resident of Stamford, CT, passed away at the age of 92 on July 28, 2017, after a brief illness. She was born on August 12, 1924 and was the daughter of the late Harry Kapustynski and Katherine Pareluk Kapustynski. Mary was educated in Stamford and was employed at the former Yale & Towne company, and retired from Excelsior Hardware in 1989. She was a communicant and parishioner of the Holy Name of Jesus Church and a member of the Pitney Bowes Golden Oldies. She was an avid traveler, enjoyed her trips to the casinos and loved playing Bingo. Mary is survived by her children, Walter Brzoska and his wife, Pamela, of Polk City, FL, Dennis Brzoska and Christine Paulhus, of Stamford, CT, Donna Scandurra and her husband, John, of Trumbull, CT, and Gerald Brzoska and his wife, Laura, of Stamford, CT; seven grandchildren and six great grandchildren also survive, as well as her sister, Helen Koczeniak and her husband, Joseph, of Stamford, CT. Mary was predeceased by her husband of 60 years, Joseph F. Brzoska, in September of 2007; six brothers, Michael, Joseph and Thomas Kapustynski and Stanley, John and Andrew Kaplane and three sisters, Anne Mocarski, Julie Kurzatkowski and Mildred Chrostowski. Mary's family will be receiving sympathy and condolences from family and friends on the morning of Tuesday, August 1, 2017, from 9am to 10:30am, at Bosak Funeral Home, 453 Shippan Avenue, Stamford, CT 06902. The interment will immediately follow the time at the funeral home at St. John R.C. Cemetery in Darien. In lieu of flowers, please consider making a donation in Mary's name to a charity of your choice. The family has entrusted Mary's final arrangements to Bosak Funeral Home, 453 Shippan Avenue in Stamford, CT. If you would like to leave a message of condolence for the family you may visit the online guestbook at www.bosakfuneralhome.com or on Facebook at www.facebook.com/bosakfuneralhome.

Mary K. Brzoska, a lifelong resident of Stamford, CT, passed away at the age of 92 on July 28, 2017, after a brief illness. She was born on August 12, 1924 and was the daughter of the late Harry Kapustynski and Katherine Pareluk Kapustynski.... View Obituary & Service Information

The family of Mary K. Brzoska created this Life Tributes page to make it easy to share your memories.