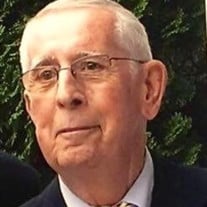 Michael T Beluk, a lifelong Stamford resident, died on Monday, November 16, 2015 after a courageous medical battle. He was predeceased by his beloved wife, Susan M Beluk, with whom he shared 46 years of marriage and a lifetime of wonderful memories. Mike and Sue were kindred spirits who were happiest when they could enjoy each other's company over a delicious meal and a glass of wine, planning their next project, day trip, family barbecue or outing with their children and their spouses, who he thoroughly enjoyed: Linda and (the late) Jim Kirby of Hamden; Katherine and Ken Dummitt of Woodbridge; Celia and Michael T. Beluk, Jr of Stamford; Stephanie and Robert F. Beluk of Atlanta; and Meredith and Nicholas E.A.Clark III of Chicago. In addition to their children, Mike and Sue felt extremely blessed with the arrival of each and every one of their fourteen grandchildren who they adored: Lauren, Michael and Matthew Beluk; Allison and Jimmy Kirby; Will and Jack Clark; Nicholas, Max, Andrew and Elizabeth Clark of Chicago; and Calem, Skyler and Jolee Beluk of Atlanta. Mike is survived by his beloved sister Catherine "Cappy" Gentile and her husband Edward. Mike and Sue and Cappy and Ed shared every birthday, anniversary, graduation, and many other special, important family activities and traditions, and Cappy and Mike have been true champions of the importance of a close family, and they and their spouses have modeled this for two younger generations now. There are many wonderful, close and well loved cousins, nieces and nephews whom he leaves behind as well. His circle of close friends was an unwavering group of guys who have been dear friends since high school, and have remained dear friends throughout his life. They have truly been a blessing to him. Mike believed very strongly in giving back to one's community, to participating fully in life at every level, to supporting those most deserving by providing opportunities for success - especially for children and families. To that end Mike became an active volunteer back in high school (Stamford HS, Class of 1956) and remained committed to service for his entire life. As a two-time past President of the Stamford Exchange Club, Michael adopted the "One Nation Under God Breakfast" and speaker series as an important project that he was especially proud of. He became involved with Meals On Wheels with his wife Susan, he later got the entire family on board every year with another very important project that he held in great regard, the Special Olympics. Mike, Sue, and all five children were involved with Special Olympics for many years. In lieu of flowers, please consider making a donation in his memory to: The Connecticut Hospice, Inc., 100 Double Beach Road, Branford, CT 06405 or www.hospice.com . Family will receive relatives and friends on Thursday, November 19th from 3pm to 7pm at the Bosak Funeral Home, 453 Shippan Avenue, in Stamford, CT. A Mass of Christian burial will be celebrated at 11am on Friday, November 20th at St. Bridget of Ireland Church, 278 Strawberry Hill Avenue, in Stamford, CT. Interment will be held private. The family has entrusted the funeral arrangements to the Bosak Funeral Home, 453 Shippan Ave, in Stamford, CT. If you would like to leave an expression of sympathy, you may sign the guestbook at www.bosakfuneralhome.com or visit the Facebook page to share memories with her family at www.facebook.com/bosakfuneralhome .

Michael T Beluk, a lifelong Stamford resident, died on Monday, November 16, 2015 after a courageous medical battle. He was predeceased by his beloved wife, Susan M Beluk, with whom he shared 46 years of marriage and a lifetime of wonderful memories.... View Obituary & Service Information

The family of Michael T Beluk created this Life Tributes page to make it easy to share your memories.