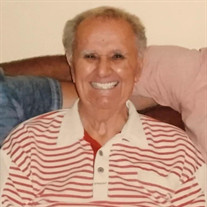 Michael William Kepchar, 91, of Stamford passed away peacefully on Jan. 24, 2022, surrounded by love. He was born in Bridgeport, CT on Jan. 18th, 1931. He was the beloved husband of Dolores Dostie Kepchar for 54 years, prior to her passing in 2016. Mike was raised in Bridgeport, CT and graduated from Harding High School where he was a standout basketball player. He then served in the Army during the Korean War where he was stationed in New Mexico. He was then able to go to college on the G.I. bill and graduated from the University of Bridgeport with a Bachelor of Science degree in mechanical engineering. Mike met Dolores while working together at Acme Shear in Bridgeport. Dolores took one look at Dad and said that's the man I'm going to marry one day. Well, one day turned into 6 years and on Feb. 24, 1962 Mike and Dolores were married at St. Vladimir's Church in Stamford. Mike was working then at General Time in Stamford and they bought a house in Shippan where Mike has lived for 60 years. Mike had an infectious smile. When asked why he always smiles, he would reply because I'm lazy. It takes more muscles to frown than smile. He was also a big talker especially on the phone or to anyone who would listen. He could spend hours talking to customer service people (or as he used to call them, customer no service) or anything regarding his most recent "inventions". And everyone was a great guy. He would say, I talked to so and so, great guy. Mike loved his sports especially the New York Giants, New York Knicks and most importantly the Boston Red Sox. He credits his grandchildren, Mike and Will for being their good luck charm in finally breaking the streak in 2004 and winning their first World Series since 1918. Mike is predeceased by his wife Dolores, his parents, John and Anna and his siblings, Mary, John, George, Ann and Helen. He is survived by his loving daughter, Ellen and her husband Pat and their sons, Michael and William and several nieces and nephews. Mike's greatest joy was being a dad to Ellen and a grandpa to Mike and Will. They meant more to him than any amount of money or accolades. Although, he did hit the Maine lottery in 1976 for $10,000. Calling hours will be Thursday, Jan. 27th from 5-8 pm at Bosak Funeral Home in Stamford. A mass of Christian burial will be Friday, Jan. 28th at 10 am at Our Lady Star of the Sea Church in Shippan. Burial will follow at Queen of Peace cemetery in Stamford. As a remembrance of Mike and his love of the Red Sox, donations can be made to The Jimmy Fund or The Red Sox Foundation. To leave an expression of sympathy for the family online, please visit www.bosakfuneralhome.com .

Michael William Kepchar, 91, of Stamford passed away peacefully on Jan. 24, 2022, surrounded by love. He was born in Bridgeport, CT on Jan. 18th, 1931. He was the beloved husband of Dolores Dostie Kepchar for 54 years, prior to her passing in... View Obituary & Service Information

The family of Michael Kepchar created this Life Tributes page to make it easy to share your memories.