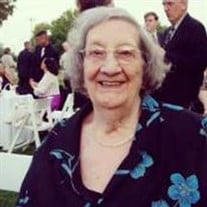 Mildred (Ritchie) Scalero, 90 years old, passed away peacefully on April 9, 2014 with her loving family by her side; born December 9, 1923 to William and Agnes (Haight) Ritchie. She was a powerful loving presence, beyond amazing, and a blessing to all she touched. She was a dedicated and devoted wife, mother, grandmother, sister, sister in-law, aunt, and friend. Her faith was her foundation and she passed that along to everyone she met. She was a member of the Women's Relief Corp. - DAR, The Home League, The Salvation Army, and The Over 60 Club. She was a Girl Scout leader of troop 507 and a Sunday School Teacher at St. John's Episcopal. She was predeceased by her parents William and Agnes (Haight) Ritchie; her husband Ralph Scalero, Jr.; grandsons, William Scalero Jr., Keith Lee Segovia, and great-grand daughter Jade Scalero; brothers, Thomas, Wilfred J., George H. and James Ritchie; sisters, Louise Marschall, Florence  Adams, Dorothy Budziszewski and Ruth Gavel along with several nieces and nephews.  She is survived by her son, William E. (Robin) Scalero, Sr.; a daughter Agnes-Ann (Guido) Segovia; her grandchildren, Tricia (Glen) DelBello, Jason, Sean and Jennifer Segovia, Anthony and Anjanette Scalero and great-grandchildren Peyton Scalero, Tate and Libby DelBello, Nicolas Segovia, Theresa Evans, and Kyrstin Perry; her sister in-laws Mildred Ritchie, Lucy Scalero, Martha Scalero, and Christina Perna; and many nieces and nephews. There will be no calling hours, a Memorial Mass will be celebrated on Saturday, April 26th at 2pm at St. John's Episcopal Church, 625 Main Street, in Stamford, CT. Burial will be private. In lieu of flowers donations can be made in her memory to the: "Kick It For Keith" Foundation - c/o Aggie Segovia, 11 Custer Street, Stamford, CT. 06902 or the Bennett Cancer Center, c/o Stamford Hospital Foundation, 1351 Washington Blvd, Ste 202, Stamford, CT 06902.

Mildred (Ritchie) Scalero, 90 years old, passed away peacefully on April 9, 2014 with her loving family by her side; born December 9, 1923 to William and Agnes (Haight) Ritchie. She was a powerful loving presence, beyond amazing, and a blessing... View Obituary & Service Information

The family of Mildred Scalero created this Life Tributes page to make it easy to share your memories.