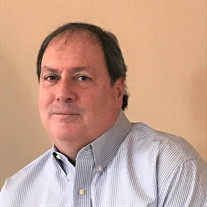 Neal Ludeke, 61 years old, of Stamford, CT passed away peacefully on October 31, 2019. Neal started his life’s journey in the Bronx, NY with two loving parents, Frances and Ernest Ludeke (deceased), as well as three siblings Walter, Karen and Linda. At the age of six Neal and his family moved to Old Bridge, NJ and that is where he made many notable friendships and memories. Neal valued education immensely. He graduated from Madison Township High School, earned his Associates Degree from Middlesex County College and his Bachelor’s Degree from Ramapo College. Neal loved any time he got to spend with his kids Michael and Shannon. He shared his love of sports with them, whether it would be coaching, 6:00 am practices, or driving up to 8 hours just to cheer them on from the sidelines. Traveling to Lake George as a family was the highlight of almost every summer of their childhoods. Together they would enjoy time spent at Six Flags Great Escape, Saratoga racetrack, playing mini golf and spending long days on the lake tubing, and just enjoying each other’s company. In most recent times, the family just enjoyed purely spending time together, watching a movie or time spent around the dinner table. Neal would always go above and beyond for his children; to him there was no other option. Michael and Shannon felt his love through every decision he made. His children will always remember him for his kind heart, love of pranks, sideline coaching, impeccable air guitar moves, valuable advice and corny dad jokes. It’s almost impossible to speak of Neal without mentioning his profound love of music. Having gone to over 1000 concerts, he appreciated art in the way many people couldn’t - through pure synthesis. One of his favorite places to go was a record shop in New Jersey called Vintage Vinyl; and while to his children it felt like never-ending, to Neal it was an endless treasure trove. Neal could endlessly search for new gems to add to his vast collection of CDs and records. Some of his favorite artists were Ian Hunter, and Stevie Ray Vaughn, but most notably Todd Rundgren. Neal shared his love for the musical genius of Todd Rundgren with many people including his children, siblings, and friends. One of his favorite times was going to celebrate Todd Rundgren’s birthday with him in Hawaii, a memory that he cherished and spoke of often. Neal thought and displayed that love is shown through action and intent. From being a CFO to a coach on the athletic field to mentoring people in life Neal felt a responsibility to many people in his life. He was often described as a guru or a teacher by his friends. As an amazing conversationalist, Neal had the ability to relate to everyone he met. While many people thought of Neal was an amazing teacher, he saw himself as was a student of life. He would often talk for hours with people whom he didn’t know well just to help a person with the simplest of problems. As a student of life, he truly believed that anyone was capable of learning something new or putting in the work to better themselves as well as their community. Neal was an exceptional person. He created many technologies, cultivated a plethora of relationships, and sparked the imagination of many. Neal could easily be identified by his go to uniform: khakis and a blue button down, by his quick-witted humor, or his infectious and boisterous laugh that could be heard from a football field away. While Neal spent much of his life and career known as a CFO, his friends and family knew him for his creativity. Much of Neal’s time had recently been dedicated to his creative writing endeavors: from stage and screenplays to short stories and children’s novels. Neal loved to tell stories. To those who knew him well this is how he will be remembered: as someone who could talk for hours on any subject, who loved sharing his time with others, who prioritized others before himself, a loving man with a gentle smile and a kind heart, and an amazing son, brother, dad and friend. To honor Neal’s memory family will receive relatives and friends on Friday, November 22nd from 4:00pm to 7:00pm with a prayer service at 7pm at Bosak Funeral Home, Stamford, CT. A ‘Celebration of Life’ will be celebrated on Saturday November 23rd at the Knights of Columbus, 507 Shippan Ave, Stamford, CT from 12pm to 4pm, to honor, reminisce and commiserate. The family has entrusted the funeral arrangements for Neal to Bosak Funeral Home, 453 Shippan Avenue, in Stamford. If you would like to leave an online condolence message for the family visit the family guestbook on bosakfuneralhome.com or on Facebook at facebook.com/bosakfuneralhome.

The family of Neal Ludeke created this Life Tributes page to make it easy to share your memories.