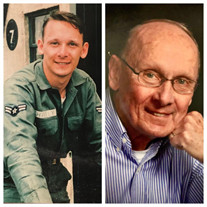 Neil W. Shively was born on January 20, 1939 to Kenneth and Gertrude Shively. He and his sister Beverly (Woods) were merely toddlers when their mother died and shortly thereafter, his father married the lovely Violet A. Shively. A few years later his sister Karen (Tucci) and a brother Howard (who passed away as an infant) were born. Neil joined the U.S. Air Force after high school and proudly served as a Communications Officer for 5 years. From there he made his way to Stamford, Connecticut and began what would be a 30-year career with SNET Co. Among many things Neil enjoyed singing, writing, sketching, sailing, astronomy, playing with the grandkids and studying his bible. He became a born-again Christian while in the Air Force and spent the past 60+ years studying and serving the Lord wherever and whenever he could. Neil is survived by his wife of 55 years, Edwina M. Shively, his daughters, sons-in-law, twelve grandchildren and three great grandchildren: Lynn and Len N., Andrew, Jonathan, Alexandra and Joseph; Jennifer and Anthony C., Brodie, Anthony, Olivia and Jack; Ruth and Chuck G., Samantha (Tucker, Owen, Nora-Kate), Tabitha, Sabrina and Talon, his sister Karen and Tom T., and many nieces and nephews. Family and friends may pay their respects on Friday, May 21st from 4 pm to 7pm at the Bosak Funeral Home, 453 Shippan Avenue, in Stamford, CT. At the family’s request, the Memorial Service on Saturday, May 22nd will be PRIVATE. However, the family invites relatives and friends to join them at 11am for a Graveside Tribute at Fairfield Memorial Park 230 Oaklawn Ave., in Stamford. For the safety of all those attending his funeral services, please wear face coverings and maintain social distancing. In lieu of flowers, please consider making a donation in Neil’s memory to camp Spofford https://www.campspofford.org/ To leave an expression of sympathy for his family online, you may sign the guestbook at www.bosakfuneralhome.com or visit the funeral home Facebook page at www.facebook.com/bosakfuneralhome .

Neil W. Shively was born on January 20, 1939 to Kenneth and Gertrude Shively. He and his sister Beverly (Woods) were merely toddlers when their mother died and shortly thereafter, his father married the lovely Violet A. Shively. A few years... View Obituary & Service Information

The family of Neil W. Shively created this Life Tributes page to make it easy to share your memories.