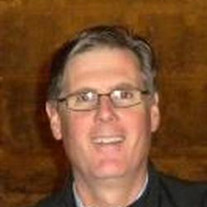 Patrick A. McCartney, age 53, passed away peacefully with his family by his side on Friday, February 7, 2014 after a long and valiant battle with cancer. Pat was born in New York City on September 14, 1960 to Dorothy and the late Patrick E. McCartney. He grew up in Hempstead, NY with his five younger brothers and sisters, Liz, Joe, Paul, Mary Ellen and Deirdre and a large close extended family. After graduating Chaminade High School (1978) and Manhattan College (1981), Pat attended Hofstra University School of Law (1984) where he met his wife Terri. He joined the law firm of Emmet Marvin and Martin in 1986 and became a partner in 1992. Pat was a Solicitor of England and Wales. He served on the board of Domus in Stamford for 14 years and was the president of Trailblazers Academy for more than 10 years. Pat was a charismatic guy. He had the rare gift of truly being able to listen to and care about all those around him - everyone who met him felt special. Family, faith and friends were most important to him. Pat loved to golf, was an avid skier, enjoyed traveling and sports. Music was a large part of Pat’s life. He listened to a broad range of musical styles and loved nothing more than hearing live bands. In addition to his loving wife Terri of 28 years, Patrick is survived by his three children, Lauren, Patrick and Thomas, his mother Dorothy, five siblings, four brothers-in-law, five sisters in law, nineteen nieces and nephews, three uncles,thirty-seven first cousins and countless colleagues and friends. In lieu of flowers, please consider making a donation in his memory to: Domus, Attn: Development, 83 Lockwood Ave., Stamford CT, 06902. Family will receive relatives and friends on Monday, February 10, 2014 from 1pm to 4pm and from 6pm to 9pm at the Bosak Funeral Home, 453 Shippan Avenue, Stamford, CT 06902. A Mass of Christian burial will be celebrated on Tuesday, February 11, 2014 at 11am at St. Michael the Archangel Parish, 469 North Street, in Greenwich, CT. Interment will follow at St. Mary’s Roman Catholic Cemetery, North Street (entrance), in Greenwich, CT.

Patrick A. McCartney, age 53, passed away peacefully with his family by his side on Friday, February 7, 2014 after a long and valiant battle with cancer. Pat was born in New York City on September 14, 1960 to Dorothy and the late Patrick E.... View Obituary & Service Information

The family of Patrick A McCartney created this Life Tributes page to make it easy to share your memories.

Patrick A. McCartney, age 53, passed away peacefully with his...