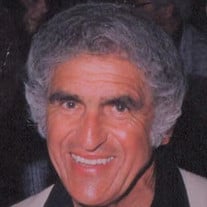 Paul Hrywna, 88, passed away at Stamford Hospital on Wednesday, April 25, 2018. He was born on March 17, 1930 to Anna “Spin” Hrywna and Steve Hrywna in Malastow, Poland, and has resided in Stamford since 1947. He married his beloved wife Shirley on September 14, 1957. She predeceased him in 2013. His career spanned many roles, including over 20 years at Capitol Records manufacturing plant in Stamford, and over 10 years at MarLe Electric Company, from which he retired. He was active in many community activities: a long time member of St. Mary's Holy Assumption Russian Orthodox Church and its 50th and 75th anniversary and building committees, as well as activity, maintenance and other councils. He was the recipient of the church’s highest service award. He and his wife enjoyed traveling, taking many cruises, as well as going to the beach, and dancing. He is survived by his brother and sister in law Andrew and Emilia Hrywna, and his brother Samuel Hrywna, all of Stamford; a nephew, Timothy Peterson, and his husband, Richard Gerrig; a niece, Kathleen Hoffman, and her husband David and their children, Caroline, Emma, and John; and his brother in law John Odomirok and his wife Suzanne. Family will receive relatives and friends at the Bosak Funeral Home, 453 Shippan Avenue, in Stamford on Friday, April 27th from 4 pm to 8 pm with a Panahita service at 6 pm. A funeral service will be celebrated in his name on Saturday April 28th at 10am at the St. Mary Holy Assumption Russian Orthodox Church, 141 Den Road, in Stamford, CT. Interment will be at the Fairfield Memorial Park, 230 Oaklawn Avenue, in Stamford, CT. In lieu of flowers, please make a donation to the church in his memory: St. Mary Holy Assumption Russian Orthodox Church, 141 Den Road, Stamford, CT 06903. If you would like to leave a condolence message online please visit the family guestbook at www.bosakfuneralhome.com or at www.facebook.com/bosakfuneralhome to share memories with his family.

The family of Paul Hrywna created this Life Tributes page to make it easy to share your memories.

Paul Hrywna, 88, passed away at Stamford Hospital on Wednesday,...