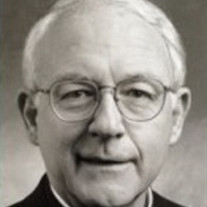 Msgr. Peter P. Dora, 76, Educator, Pastor and Chaplain, passed away on Monday, June 5, 2017 at Calvary Hospital, Bronx, NY. A Stamford native, he was born on April 29, 1941, the son of Paul and Rose Kmetz Dora. He attended K.T. Murphy Grammar School, St. Mary School and Stamford High School, and was prepared for the priesthood at St. Thomas Seminary, Bloomfield and St. Mary Seminary in Baltimore, Md. He was ordained to the priesthood by Bishop Walter W. Curtis on May 20, 1967, at St. Augustine Cathedral, Bridgeport. Always interested in education, after ordination he served as faculty member and spiritual director of Notre Dame Girl’s High School in Bridgeport (now Notre Dame High in Fairfield); St. Mary High School in Greenwich, now the home of Greenwich Catholic School; and at the former Christ the King Preparatory School in Southport. He was also spiritual director of the Diocesan College House of Studies, the predecessor of St. John Fisher Seminary. During his years in education, Msgr. Dora assisted at several parishes, including Holy Name of Jesus, Stratford; Christ the King, Trumbull; St. Gabriel, Stamford; St. Thomas Aquinas, Fairfield; and St. Michael the Archangel, Greenwich. In 1973, he was named director of religious education for the diocese. In 1976, Msgr. Dora took a sabbatical to pursue ecumenical studies at the Catholic University of America in Washington, D.C., and at the Woodstock Center at Georgetown University, and he later completed further studies at Fairfield University and at the Monastery of Taize, France. He was appointed director of Ecumenical and Interreligious Affairs in 1981, a position he held for 10 years. In 1984 he was named pastor of Saint Benedict Parish in Stamford. In 1990 he was appointed pastor of Holy Name of Jesus in Stratford, where he had started as a part-time parochial vicar after his ordination. In 2003, he became the pastor of St. Theresa Parish, Trumbull, a position he held until 2006, when he took the post of chaplain at Stamford Hospital with residence at St. Clement Parish in Stamford. “It’s a joy to serve the people of God in the Diocese of Bridgeport, and to grow in faith and grace with the people in the various parishes where I have served, and will continue to serve,” Msgr. Dora said at the time of his appointment to St. Theresa Parish. Msgr. Dora was also a diocesan consultor, president of the Board of Directors Catholic School System for Region VI, and was on the Clergy Personnel Committee and the Priests’ Council. He became Chaplain to His Holiness to Pope John Paul II in 1991, with the title of Monsignor. Msgr. Dora lived in retirement at Catherine Dennis Keefe Queen of the Clergy Residence in Stamford. There will be no wake. A Mass of Christian burial will be celebrated on Friday, June 9th at 11am at Saint Bridget of Ireland Church, 278 Strawberry Hill Avenue, in Stamford. His interment will follow to St. John Roman Catholic Cemetery in Darien, CT. Msgr. Dora is mourned his older sister, Sister Patricia Dora, CSJ, of Hartford, his twin sister, Mary Rose Patten and her husband, Dwight, and by his nieces and nephews. In lieu of flowers, donations in Msgr. Dora’s memory can be made to the Congregation of St. Joseph, 650 Willard Avenue, Newington, CT 06111; and the Expansion Fund of the Catherine Dennis Keefe Queen of Clergy Retired Priests’ Residence, 274 Strawberry Hill Ave., Stamford, CT 06902. If you would like to leave an expression of sympathy for the family online, you may sign the guestbook at www.bosakfuneralhome.com or visit the funeral home Facebook page at www.facebook.com/bosakfuneralhome to share memories with his family.

The family of Msgr. Peter P. Dora created this Life Tributes page to make it easy to share your memories.