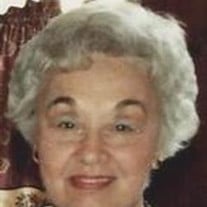 Genevieve (Jean) Pietrzkiewicz, 97, a lifelong resident of Stamford, CT, peacefully passed away in the early morning of Saturday, March 1, 2014 with her loving children by her side.  Jean was born on May 3, 1916 to the late Jakob and Ewa (Batura) Krasniewicz. Jean was the oldest of her six siblings and, after the passing of her father when she was young, the care of her brothers and sisters fell to both her and her Mom. That call to service became the hallmark of Jean’s life. Quietly and very lovingly she cared in the same way for her own family, which became her life’s focus. All who knew her benefitted from her quiet, yet very uplifting support. Those who knew her were truly blessed by her presence in their lives. She is survived by her children; Robert Pietrzkiewicz (Beverly), Stanley “Pitch” Pietrzkiewicz (Rosalie), Carol Lostaglio and Judith Sinn Budreckas (Klem), her grandchildren; Keith Lostaglio, Michelle Houle (Bob), Jill Lostaglio, Susan Lostaglio, Courtney and Eric Sinn and her precious great grandchildren;  Meredith and Isabella Lostaglio, and Joshua and Sarah Houle.  She is also survived by her sister, Frances Bobinski.  In addition to her parents, Jean was preceded in death by her beloved husband, Stanley, her brothers; Michael (Spike) and Walter (Bucky) Krasniewicz, and her sisters; Stella Maurer and Sophie Rossi-Woodd. The Pietrzkiewicz family will receive the sympathy of friends and family on Friday, March 7th from 4 p.m. to 8 p.m. at Bosak Funeral Home, 453 Shippan Avenue, Stamford, CT 06902. A Mass of Christian Burial will be celebrated on Saturday, March 8th at 11 a.m. at Holy Name of Jesus Church, 305 Washington Blvd., in Stamford. The committal service and interment will immediately follow mass at St. John R.C. Cemetery, 25 Camp Avenue, in Darien. In lieu of flowers, the family asks that you consider making a donation in Jean’s name to: The Holy Name Restoration Fund, 4 Pulaski Street, Stamford, CT 06902. The family has entrusted the funeral arrangements to Bosak Funeral Home, 453 Shippan Avenue, in Stamford.  If you would like to leave an online condolence message, you may sign the family guestbook on www.bosakfuneralhome.com or visit the funeral home on Facebook at www.facebook.com/bosakfuneralhome.

Genevieve (Jean) Pietrzkiewicz, 97, a lifelong resident of Stamford, CT, peacefully passed away in the early morning of Saturday, March 1, 2014 with her loving children by her side.  Jean was born on May 3, 1916 to the late Jakob and Ewa (Batura)... View Obituary & Service Information

The family of Genevieve Pietrzkiewicz created this Life Tributes page to make it easy to share your memories.