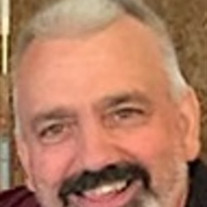 Raymond Paul Dalesio, Jr., loving husband, father, brother, uncle and friend of many, passed away suddenly at his home in Norwalk on Wednesday, September 21, 2016. Ray was born July 2, 1955 in Greenwich, CT and was one of two children born to the late Raymond, Sr. and Patricia (Connolly) Dalesio. Ray was 61 years old. Ray went to Stamford High and graduated in 1973. After graduating, he joined the United States Navy. Upon returning from the service Ray was involved in several jobs, mainly roofing work, before working for the Local 30 Union as an operating engineer. In his leisure time, Ray loved being at home with his family. He was an avid Jets and Mets fan, to say the least. You could often find him watching a documentary on Frank Sinatra, with a hot black coffee in hand. One of his greatest hobbies was drawing cartoons, as well as airbrushing. He enjoyed the holiday seasons, but Halloween was his all time favorite. Ray cherished all of childhood friends growing up on Custer Street in Stamford. Ray was immensely generous; he would always put others before himself. Ray got joy out of making everyone smile. Ray is survived by his devoted wife of 27 years, Linda Dalesio, his three beloved children; Denis, Shannon and Michael Dalesio, sister, Cheryl Anderson (Al), mother-in-law; Eva Laszlo, brother-in-law; Stephen Laszlo, sister-in-law; Eva Laszlo, nieces and nephews; Daniel and Melissa Anderson, Renee Blidner (Jeff), and David Laszlo (Jennifer), and other family members and friends. Ray was taken from us way too soon and he will be sadly missed by all those who knew and loved him. The Dalesio family will be receiving the condolences of friends and family on Sunday, September 25, 2016 from 12pm to 4pm at Bosak Funeral Home, 453 Shippan Avenue, Stamford, CT 06902. At the request of Ray’s family the interment will be private. In lieu of flowers the family asks that you consider a donation in Ray’s name to: Special Olympics, 1133 19th St., NW, Washington, DC 20036 or www.give.specialolympics.org or to the ASPCA, PO Box 96929, Washington, DC 20090 or www.aspca.org/ways-to-give. The family has entrusted the funeral arrangements to Bosak Funeral Home, 453 Shippan Avenue, in Stamford. If you care to leave an online condolence message please visit the family guestbook on www.bosakfuneralhome.com or on Facebook at www.facebook.com/bosakfuneralhome.

Raymond Paul Dalesio, Jr., loving husband, father, brother, uncle and friend of many, passed away suddenly at his home in Norwalk on Wednesday, September 21, 2016. Ray was born July 2, 1955 in Greenwich, CT and was one of two children born to... View Obituary & Service Information

The family of Raymond Paul Dalesio created this Life Tributes page to make it easy to share your memories.