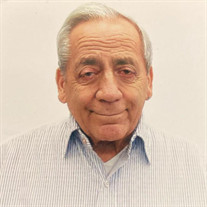 Robert V. Librandi (“Bob”) passed away on March 4, 2021. He was born on April 25, 1943 at Stamford Hospital (Stamford, CT) to Josephine (nee Licato) and Michael Librandi (Stamford, CT). Bob was born and raised on the west side of Stamford, where he graduated from Stamford High School, Class of 1961. Bob was a master mechanic, and owned Bulls Head Service since 1985. Bob was a valued member of the Oldsmobile Club of America, National Antique Auto Club as well as the Antique Auto Club of America. Bob’s prized car was his 1962 Oldsmobile Starfire, which he presented nationally at car shows where he won numerous “Best in Class” trophies. His passion and dedication to his cars was only surpassed by his love for his family and friends. Through his profession and appearances at car shows, Bob was well known to many in the community. Bob will always be remembered as a kind and generous friend, who treated everyone as if they were family. He is survived by his wife of 57 years, Joann, his children: Robert Jr. of Gulf Port FL, David (Michele) of Stamford CT, as well as his grandchildren: Amanda, Matthew and Alyson Librandi, his siblings Mildred Martin (Ralph) of Stamford, his twin brother Joseph (Catherine) of Greenwich, Michael (Esther) of Stamford, and William (Donna) of Stamford. As well as by several nieces and nephews. Bob was predeceased by his beloved parents. In lieu of flowers, please consider making a donation to St. Jude Children’s Research Hospital: ALSAC/St. Jude Children's Research Hospital, 501 St. Jude Place, Memphis, TN 38105 or www.stjude.org . Family welcomes relatives and friends on Tuesday, March 9th from 4pm - 8pm at Bosak Funeral Home, 453 Shippan Avenue, Stamford. His funeral services and burial will be private. In compliance with state mandates and the safety of all those attending his funeral services, it is mandatory to wear face coverings and maintain social distancing. If you would like to leave a condolence message online please visit the family guestbook to share memories with his family at www.bosakfuneralhome.com or www.facebook.com/bosakfuneralhome.

The family of Robert "Bob" V. Librandi created this Life Tributes page to make it easy to share your memories.