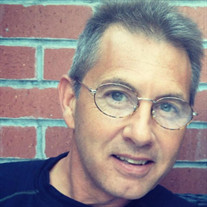 Robert Rogliano, 60, a lifelong resident of Stamford, CT, passed away unexpectedly on February 22, 2020. Rob was born to the late Aldo and Elizabeth Rogliano on March 4, 1959 in Stamford. He was a 1977 graduate of Stamford Catholic High School. Rob was the sole owner and operator of Deck Mates Powerwashing. Rob loved the outdoors. He often said the woods were his church. His love of fishing was evident to everyone. Over the years, he built friendships with many fishermen on the various Connecticut rivers he frequented. He developed a love for tying fishing flies, a hobby that truly brought out his artistic side. Rob loved to camp, even in blizzards, with his closest friends who were like his brothers. Rob cherished his wife, Susan, who was the love of his life. His daughter, Catherine, was his pride and joy. He was a committed family man who would do anything to make them happy. He was dedicated to his immediate and extended family, who knew they could lean on or rely on him for anything, big or small. He was sentimental, generous, and kind. He loved his country and was a proud American. Rob is survived by his loving wife of 30 years, Susan Portanova Rogliano, and his daughter Catherine Rogliano and partner Michael. He is also survived by his four siblings: Susan Shortley and husband Jim, Betsy Dyer and partner Glenn Vitale, Guy Rogliano and wife Karen, and Barbara Tracy. In addition, he is survived by his mother-in-law, Carmela Portanova, sister-in-law Debra Portanova Nelson, and brothers-in-law Michael Portanova and wife Robin and David Portanova and wife Laura. He adored his many cousins, nieces, nephews, and beloved friends. In addition to his parents, Rob is also predeceased by his father-in-law Anthony Portanova. In lieu of flowers, please make a donation in Rob’s memory to Trout Unlimited at tu.org or via mail to PO Box 7400, Woolly Bugger, WV 25438. Family will receive relatives and friends on Friday, February 28th from 4:00pm – 8:00pm at Bosak Funeral Home, 453 Shippan Avenue, Stamford, CT. A Mass of Christian Burial will be celebrated on Saturday, February 29th at 10:30am at Sacred Heart Church, 37 Schuyler Ave, Stamford, CT. Interment will follow at a later date. The family has entrusted the funeral arrangements to Bosak Funeral Home, 453 Shippan Avenue, in Stamford, CT. If you would like to leave a condolence message for the family you may visit the guestbook on bosakfuneralhome.com or on Facebook at facebook.com/bosakfuneralhome.

Robert Rogliano, 60, a lifelong resident of Stamford, CT, passed away unexpectedly on February 22, 2020. Rob was born to the late Aldo and Elizabeth Rogliano on March 4, 1959 in Stamford. He was a 1977 graduate of Stamford Catholic High School.... View Obituary & Service Information

The family of Robert Rogliano created this Life Tributes page to make it easy to share your memories.