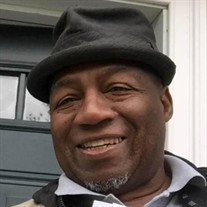 Our beloved Rodney Pratt, age 68, went peacefully to be with the Lord Jesus on Thursday, April 28, 2022, at his residence surrounded by his family and friends after an almost two-year courageous battle with brain cancer. He was born June 18, 1953 in Baltimore, MD to the late Glenn and Grace Pratt and grew up in the Pocono Mountains. He graduated from Pocono Central Catholic High School in the early 70’s. Rodney and his brother Rodell starred on the Kinsmen basketball team and played many tough games against the Cardinal basketball team. They also played on the Kinsmen baseball league. They both participated with Pocono Mountains students on various YMCA basketball games as well as in scouting and various amateur baseball teams, including Little League, Babe Ruth, and American Legion. Rodney served as the President of the Pocono Central Catholic Student Government Association. Through that group, he had worked with the Pocono Mountain student government representatives on dances and various other educational activities. Rodney attended Mansfield State University where he earned a basketball scholarship. Rodney enjoyed riding his motorcycle and going to Bear Mountain on the sunny days. He loved Cape Cod and Martha’s Vineyard where he resided for a time in his life. Rodney was the Principal of R. Pratt and Associates (Builder), an executive chef (great cook!) for three Stamford restaurants, horticulturist, carpenter, contractor, arborist, armed guard, constable, bail enforcement agent, community activist, community advocate, majority leader of the City of Stamford 30th Board of Representatives and politician. He will be immensely missed by those he leaves behind. A wonderful, loving, and caring father of Jonah and Moses, brother of Glenny, Gwendell, Raymond, Greta, Renee, Rodell, Robert, Johanna, Shelly, Gerard and Gabriel. His closest nieces and nephews whom adored, Anthony, Jennifer, Alicia, Solomon, Cherie, Monique, Erica, Kenneth, Danielle, Bryan, Jamie, Grace and Kaitlin will surely miss him and remember him as he was loving, caring and generous. He cared and counseled them as a father. A special thank you to his best friend of over 35 years, Arthur Bailey, who inspired Rodney to be a risk-taker in many endeavors from business in America and Trinidad, and who cared and literally stayed by Rodney’s side to the end. They shared countless experiences and memories. His friend and next-door neighbor, Abbu, who was always appreciated for the love and care Abbu’s family showed him and Moses with their delicious meals. Dino, the mechanic, who knew the importance of keeping Rodney’s vehicle mechanically sound so that he could get to his appointments. His dear friends, Kindrea Walston who was his protégé in community service and also his pro-bono assistant; Jeffrey Stella (aka Robin), who was fondly referred as one of Rodney’s deputies, who was hand by hand with Rodney fighting for the future of the community as board members as they worked as the dynamic duo (Batman and Robin), Nina Sherwood, who also, was fondly referred to as one of Rodney’s deputies who made Rodney happy when elected to his position as Majority Leader of the City of Stamford Board of Representatives, Jeff Curtis, the President of the Board of Representatives with years of good conversation and advice. Rodney spoke high of the Board of the Representatives and used the moniker of “Justice League”. Know this, Rodney was thrilled that our current mayor, Caroline Simmons took the helms and really wanted to be around to see her succeed. Lastly, words are not enough to express the gratitude to a dynamic, compassionate caregiver, Yvrose Calixte, who in weeks became an integral part of the family and friend for the level of care, attention, concern, love, and dedication she bestowed to Rodney. Oh, yes, the love that Yvrose put out daily to Rodney did not go unnoticed. Family and friends who were at the house daily knew that it was something special about her. All in all, Rodney prepared Moses for such a time as this by imprinting himself on Moses to protect, respect, care for and provide assistance to those who cannot help themselves. Rodney, Moses and Tyson (Rodney’s canine son) enjoyed their family time together. They were a package deal. The movie watching, (especially DJANGO) was one of Rodney’s favorite movies, working security and bail enforcement and cracking jokes (one-liners) with each other, or Rodney exercising his cooking ability. He was very talented. If you were one of the fortunate ones who have had the pleasure to kick back with Rodney and the family, you would remember the cold Rolling Rocks beer as it refreshed his youthful memories. Rodney’s compassion and care for neighbors and friends allowed him to receive people to stay at his home when in need. The doors of his house were always open to many. Rodney was a fierce fighter, even after the brain cancer diagnosis, he tirelessly kept working for you and the community until he could no longer perform his duties. That was just who Rodney was. He was always thinking and planning on ways of how to help the youth to improve their opportunities in life, get grants for businesses and improve the safety of his community. A true human superhero of the West Side. A son of Christ, a friend of many, cared for many and loved them all. Rodney’s mantra was: "DO NOT GO WHERE THE PATH MAY LEAD, GO INSTEAD WHERE THERE IS NO PATH AND LEAVE A TRAIL." - Ralph Emerson Family and friends are welcome on Tuesday, May 10, 2022 from 4pm to 6pm at Bosak Funeral Home, 453 Shippan Ave, in Stamford, CT. To leave an expression of sympathy for the family online, please sign the family’s guestbook at www.bosakfuneralhomestamford.com or www.facebook.com/bosakfuneralhome.

Our beloved Rodney Pratt, age 68, went peacefully to be with the Lord Jesus on Thursday, April 28, 2022, at his residence surrounded by his family and friends after an almost two-year courageous battle with brain cancer. He was born June 18,... View Obituary & Service Information

The family of Rodney Pratt created this Life Tributes page to make it easy to share your memories.

Our beloved Rodney Pratt, age 68, went peacefully to be with...