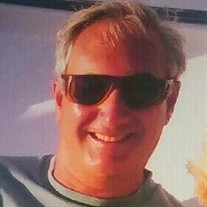 Roger Michael Wasco, long-time resident of Stamford, passed away peacefully on the morning of Thursday, May 23, 2019 at Fairfield County House hospice in Stamford. Roger was born in Los Angeles, CA on December 13, 1942 to the late Michael and Anna (Dubeck) Wasco. He was 76 years old at the time of his passing. Roger is survived by his best friend and wife of 27 years; Christine Wasco (Dedura), his cousins; Carol Jacobson, of Norwalk, CT, and her daughters, and Frank and Ann Wasco, of Stamford, CT, and their sons, and cousin-in-law; Lee Lemos, of New Milford, CT, and her children. Roger proudly served in the United States Air Force from 1964 to 1968, completing a tour of duty in South Vietnam. Upon his return home from the service, he was employed as a mechanical designer for several companies including Pitney Bowes, Norden Systems and Sikorski Aircraft. In his leisure time, Roger enjoyed going to the beach, boating and fishing, skiing and most of all spending time and travelling with his best friend and wife, Christine. Roger truly loved life. He will be sadly missed by those who loved him, and his memory will live on eternally in their hearts. A mass of Christian burial will take place on Wednesday, May 29th, at 10:30am at St. John R.C. Church, 1986 Post Road, Darien, CT 06820. The interment will immediately follow mass at St. John R.C. Cemetery, 25 Camp Avenue, in Darien. The family has trusted Roger’s final care to Bosak Funeral Home, 453 Shippan Avenue, in Stamford. If you care to leave an online condolence message you may visit the family guestbook on bosakfuneralhome.com or on Facebook at facebook.com/bosakfuneralhome.

Roger Michael Wasco, long-time resident of Stamford, passed away peacefully on the morning of Thursday, May 23, 2019 at Fairfield County House hospice in Stamford. Roger was born in Los Angeles, CA on December 13, 1942 to the late Michael... View Obituary & Service Information

The family of Roger Michael Wasco created this Life Tributes page to make it easy to share your memories.