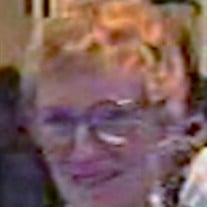 Rosemarie V. Boucher, 84, a lifelong resident of Stamford, passed away peacefully on Friday, December 4, 2015 after a long illness. She was born in Stamford to the late George and Rose Sheridan, immigrants from Ireland.  Rosemarie attended St. John's Parochial School and graduated from Stamford High School, class of '51. Shortly after graduation, she met and married her husband Joseph (Joe), and together they built a life in Stamford with their 3 children. Rosemarie worked in various administrative roles at Dorr Oliver and most recently as a receptionist with GE Investments Inc.  Rosemarie had a beautiful singing voice and sang alto in St. Cecelia's Church choir for years. She was known to many of her friends as Rosemary. To only those very close to her, she was known as Red due to the brilliant color of her hair. She was a devoted grandmother, and her beloved grandchildren called her Ma Mere. Rosemarie was well known for her legendary Irish soda bread, her graceful Irish dancing ability, her belief in higher education and her impeccable taste.  Rosemarie is survived by her loyal and dedicated husband of 60 years, Joseph F. Boucher, her children, Leda Amanatidis and her husband Konstantinos of Vermont, Robert Boucher, Sr. and his wife Denise of Stamford, and Jacqueline Boucher of Virginia. She is also survived by her loving grandchildren: John, David, Joseph and Hope Amanatidis; Robert Jr., Katherine, Margaret and James Boucher; her siblings Eileen Chapell and her husband Robert of Florida, T. George Sheridan and his wife Agnes of Stamford; as well as many nieces and nephews. Besides her parents, Rosemarie was predeceased by her siblings, Bernard, Patricia, and Shaun. A mass will be held at Holy Spirit Church in North Stamford at 11:00am on December 28, 2015. There will be no calling hours. In lieu of flowers, the family requests that donations be made in Rosemarie's memory to a charity of one's choice . The Boucher family has entrusted the funeral arrangements to Bosak Funeral Home, 453 Shippan Avenue, in Stamford. If you care to leave a condolence message online please visit the family guestbook on www.bosakfuneralhome.com or on the funeral home Facebook page at www.facebook.com/bosakfuneralhome.

Rosemarie V. Boucher, 84, a lifelong resident of Stamford, passed away peacefully on Friday, December 4, 2015 after a long illness. She was born in Stamford to the late George and Rose Sheridan, immigrants from Ireland.  Rosemarie attended... View Obituary & Service Information

The family of Rosemarie Boucher created this Life Tributes page to make it easy to share your memories.