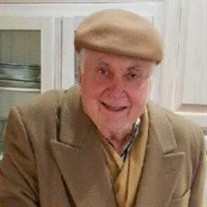 Sabino V. Melchionne (Sammy), born and raised in Stamford, CT, a lifetime Cove resident, passed away peacefully with family by his side at Stamford Hospital, September 25th, 2018. Sabino was born on March 14, 1939, to the late Sabino and Alice (Borea) Melchionne. He was 79 years old at the time of his passing. Sam was an entrepreneur with various business ventures. He originated Cove Pizza and along with his sister, they ran NY Pushcart Hot Dogs for 17 years. Once we find the hidden recipe, his famous chili will live on... Longtime member of the Black Road Auto Club and had a passion for classic cars. He was happiest when overseeing any type of project as a self-proclaimed "general contractor". Sabino is survived by his daughter Danette and husband Mark Ayars and daughter Suzette and husband David Guastella. His pride and joy were his grandchildren Nicholas Sabino, Dante Francesco Ayars and Sami-Giana and Bianca Guastella. His sister Gloria (Bud) Kopec, brother Frank (Kathy) Melchionne, nephews Eddie, Billy, Johnny, Dennis and their families. In addition, he also has several great nieces and nephews. Sabino is predeceased by niece Christina Kopec. He will be missed by his longtime companion Mama Gina and many friends including Giannitti, Defeo, Mike, Bob, Dom and has joined his friends, Frankie, Joe, Junior and Joan in heaven. Sabino’s family will receive the sympathy and condolences of family and friends on Friday, September 28th from 4pm to 8pm at Bosak Funeral Home, 453 Shippan Avenue, Stamford, CT, 06902. A mass of Christian burial will take place on Saturday, September 29th at 10:00am at Saint Mary of Stamford Parish, 566 Elm Street, Stamford, CT 06902. Internment will follow at Fairfield Memorial Park Cemetery, 230 Oaklawn Ave, Stamford, CT 06905. In lieu of flowers donations may be made to the American Heart Association at www.heart.org/en/ in honor of his beloved nephew William Kopec. The family has entrusted the funeral arrangements to Bosak Funeral Home, 453 Shippan Avenue, in Stamford, CT. If you would like to leave a condolence message for the family you may visit the guestbook on bosakfuneralhome.com or on Facebook at facebook.com/bosakfuneralhome.

Sabino V. Melchionne (Sammy), born and raised in Stamford, CT, a lifetime Cove resident, passed away peacefully with family by his side at Stamford Hospital, September 25th, 2018. Sabino was born on March 14, 1939, to the late Sabino and Alice... View Obituary & Service Information

The family of Sabino V. created this Life Tributes page to make it easy to share your memories.