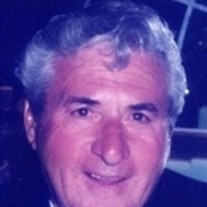 Life Legacy Salvatore Gerald Zolluccio, a liftetime Stamford resident passed away on October 21, at the age of 87. Sal was born on August 21, 1930 on Alvord Lane where he resided his entire life. He was the son of the late Oreste and Marianna Zolluccio who immigrated to Stamford from Marcianise, Caserta, Italy.Sal was a devoted husband, father and grandfather to whom family meant everything. He was predeceased by his wife of 62 years, Katherine "Kitty" Zolluccio, in July 2017 and is survived by his daughter, Marion Carey and husband Leo of Fort Lauderdale, FL and his son, Jeff Zolluccio and his wife Angela of Stamford along with his grandchildren; Jenna, Lauren and Jeffrey. He is also survived by his sister, Eleanor Mead, her son Frederick and his wife Gail and several other nieces and nephews. He is predeceased by his brother Angelo Charles Zolluccio.Sal enlisted in the US Army and represented his country during the Korean Conflict and was stationed in Okinawa, Japan. His automotive career began at an early age as an apprentice when he worked at International Harvester / Elm Sales & Service of Stamford. It was there that Sal discovered his special talent and ability to repair automobiles and was known as being one of the best in his field. Sal was the founder of "Clark's Hill Chevron" which he established in 1961 and located at the intersection of East Main Street and Clark's Hill in Stamford. Sal also enjoyed playing and listening to music, gardening, and playing golf. He will be missed by all those who knew and loved him and he will be fondly remembered. The family will receive friends and family on Monday, October 23, 2017 from 4p.m. to 8p.m. at the Bosak Funeral Home, 453 Shippan Avenue, Stamford, CT. A mass of Christian burial will take place on Tuesday, October 24th at 10am at St. Catherine of Siena Church, 4 Riverside Avenue, in Riverside, CT. The interment, with military honors, will immediately follow mass at St. Mary R.C. Cemetery in Greenwich.In lieu of flowers, donations in memory of Sal Zolluccio may be made to "River House Adult Day Center", 125 River Road Ext., Cos Cob, CT 06807. The family would like to extend a special thank you to the caregivers of "Brighton Gardens".

Life Legacy Salvatore Gerald Zolluccio, a liftetime Stamford resident passed away on October 21, at the age of 87. Sal was born on August 21, 1930 on Alvord Lane where he resided his entire life. He was the son of the late Oreste and Marianna... View Obituary & Service Information

The family of Salvatore G. Zolluccio created this Life Tributes page to make it easy to share your memories.