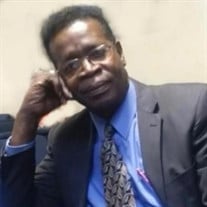 Born in St. Thomas, Virgin Islands on December 20, 1951 to the late Beatrice Meyers and Frederick Jones, Stanley dedicated his life to guiding the youth, displaying a wonderful example of what it means to never take opportunities for granted. After attending Charlotte Amalie High School, he migrated to New York in 1975 at the age of eighteen. He did not have much support, but through the grace of his Savior and his determination to fulfill his aspirations, he made the best of it while inspiring others throughout his lifetime. With diligence, he advanced to be become a food service manager and worked for several different restaurant chains for over 30 years. Tired of answering to others and wanting to spend more time with his family, he then became a taxi operator for 10 years. He stopped working in December 2018 when he was diagnosed with stage 4 lung cancer. Stanley was known for the daily inspiration and encouragement that he provided to those around him. He often sent uplifting scriptures, inspirational songs and poems to his loved ones, friends and acquaintances, even while he himself was going through trying times, a true testament to his faith in God. He was ready with a kind word and a Bible, and helped many of his clients as a taxi operator. He was there to lend a helping hand to many, without question or obligation. There was no question that the church front would be shoveled after any snowstorm. Stanley was devoted to family. He is survived by his wife Claudette Jones; his seven children Ebony, Brenda, Christian, Tariq, Tyler, Aaliyha, & Tyvaughn; along with his brothers & sisters, Yvette, Lynette, Violet, Elvet, Nelson, Wilson, Auguste, Dale, Warren, Chuck, Jackie, Shirley, Ted, Andy & Annette. Stanley’s old soul, yet young at heart has touched many and will forever live on in grace and love. His transition will never be undermined, for his ability to provide knowledge, guidance, love, forgiveness, and resilience will keep his legacy alive.

Born in St. Thomas, Virgin Islands on December 20, 1951 to the late Beatrice Meyers and Frederick Jones, Stanley dedicated his life to guiding the youth, displaying a wonderful example of what it means to never take opportunities for granted.... View Obituary & Service Information

The family of Stanley S. Jones created this Life Tributes page to make it easy to share your memories.