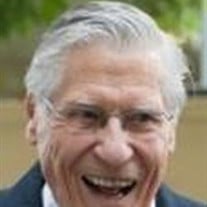 Stanley Thomas Mrus was born in Stamford on January 26, 1927 and passed away at home in New Canaan on October 18, 2014. Stan grew up in Stamford and moved to New Canaan as a young married family man where he lived for over sixty years. Stan graduated from Stamford High School and then enrolled in Notre Dame University. His studies were interrupted during the war years when he entered and graduated from the U.S. Merchant Marine Academy in the Midshipman Class of 1948 with a BS in Marine Engineering. After a serving his time with the Merchant Marines, which included sailing to Africa and South America, he resumed his studies at Notre Dame University and graduated in 1950 with the Class of 1948 with a degree in Mechanical Engineering. In 1972 he graduated from Iona College with a Master's Degree in Computer Science. Stan enjoyed a successful profession as a mechanical engineer. He worked at a number of firms, which gave him an interesting and varied career. His assignments were diverse and included projects for NASA and the Nuclear Regulatory Commission. His most satisfying assignment, though, was with AMF where he developed robotics for industrial use. Stan finished his career at Burns & Roe, an engineering consulting firm, as a lead engineer on the Waste-to-Energy team. Stan was active in the Norwalk Photography Club with Elaine, his wife. He enjoyed cultural events at area universities, attending author talks and movie nights at libraries in the vicinity, and taking classes at the Lifetime Learner's Institute, Norwalk Community College, and the Stamford branch of UConn. Stan was a member of the Knights of Columbus and achieved the status of a Knight of the Fourth Degree. The love and light of Stan's life was his family. He was so proud of his wife, children, and granddaughter and delighted in their achievements and adventures. He was their biggest cheerleader, advocate, and supporter. He was also ever ready to lend a helping hand and a shoulder to cry on when needed. He is survived by Elaine Stefanowski Mrus, his wife of over 63 years, Marc Mrus of Santa Fe, New Mexico, his son, Lauren Simpson of New Milford, Connecticut, his daughter, Jason Mrus of New Canaan, Connecticut, his son, and Vanessa Simpson, his granddaughter, and Michael Kraeuter, her husband, both of Reston, Virginia. He is also survived by Marian Karas, his sister, Irene Mrus, his sister-in-law, as well as nieces and nephews. Visiting hours are on Thursday, October 23, from 3 - 7 pm at Bosak Funeral Home, 453 Shippan Avenue, in Stamford, Connecticut. A Roman Catholic high mass will celebrate Stan's life on Friday, October 24, at 11 am at St. Aloysius Church in New Canaan, Connecticut. Stan and Elaine loved traveling, particularly out west to visit our National Parks. In lieu of flowers, and to honor Stan's love and enjoyment of our National Parks, donations can be made to the National Parks Conservation Association, 777 6th Street, NW, Suite 700 Washington, DC 20001-3723; www.npca.org.

Stanley Thomas Mrus was born in Stamford on January 26, 1927 and passed away at home in New Canaan on October 18, 2014. Stan grew up in Stamford and moved to New Canaan as a young married family man where he lived for over sixty years. Stan... View Obituary & Service Information

The family of Stanley T Mrus created this Life Tributes page to make it easy to share your memories.