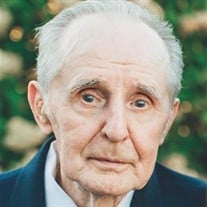 Sergeant Major Stanley J Sandlock, 90, passed away at home in Bel Air, MD, peacefully with family by his side on February 3, 2020. He was born August 11, 1929 in Stamford, Connecticut to the late Joseph and Bertha Sandlock and was the youngest of two children. He was married to the late Elizabeth Sandlock for 68 years. Stanley attended Old Greenwich Grammar School and Greenwich High School, graduating in 1947. During his time there he played on the baseball and basketball teams. At age 14, he began working for the Sterling Watts Hardware store in Old Greenwich, CT. Stanley went on to spend 53 years in the hardware business with Watts Hardware where he eventually became the store’s manager. He then continued on at the same store after it was sold in 1986 and became Feinsod Hardware. Stanley enlisted in the Army National Guard 192nd Field Artillery 2nd Battalion in 1946 with which he served for 42 years. As a member of the Army National Guard, he was stationed in Germany for a year during the Korean War. While serving he also was part of the unit’s baseball and basketball teams. He retired from the National Guard as a Sergeant Major in 1989. He also led the National Guard Honor Firing Squad for more than 30 years. Stanley earned the Connecticut Medal of Valor in 1958, the state’s highest and most prestigious award of military heroism in the performance of duty in state emergency operations. Stanley married Elizabeth in 1951 and started their family shortly after. Stanley loved being a “Papa” to his three grandchildren and three great-grandchildren. Some of his happiest times have been spent surrounded by friends and family. Stanley will forever be loved by those that he left behind. He is survived by his two daughters, Susan Salerno and her husband Paul of Trumbull, CT and Patricia Sandlock of Bel Air, MD; his three grandchildren, Brittany (Lorenti) Binger and husband Josh of Monroe, WI, Allison (Lorenti) Burriss and her husband Zach of Forest Hill, MD, and Tim Salerno of Boston, MA; and his three great grandchildren Bodhi Binger, Makenzie Burriss and Kyla Binger. Besides his parents and wife, Stanley was predeceased by his one sister Bertha Viesta. Family will receive relatives and friends on Monday, February 10th from 4pm to 8pm at Bosak Funeral Home, 453 Shippan Avenue, Stamford, CT. A Mass of Christian Burial will be celebrated on Tuesday, February 11th at 10:30am at Holy Name of Jesus Church, 325 Washington Blvd, in Stamford, CT. His interment will follow at Fairfield Memorial Park Cemetery, 230 Oaklawn Ave, Stamford, CT. The family has entrusted the funeral arrangements to Bosak Funeral Home, 453 Shippan Avenue, in Stamford, CT. If you would like to leave a condolence message for the family you may visit the guestbook on bosakfuneralhome.com or on Facebook at facebook.com/bosakfuneralhome.

Sergeant Major Stanley J Sandlock, 90, passed away at home in Bel Air, MD, peacefully with family by his side on February 3, 2020. He was born August 11, 1929 in Stamford, Connecticut to the late Joseph and Bertha Sandlock and was the youngest... View Obituary & Service Information

The family of Stanley J. Sandlock created this Life Tributes page to make it easy to share your memories.

Sergeant Major Stanley J Sandlock, 90, passed away at home in...