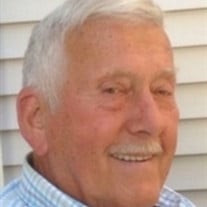 Life Legacy Stanley Edward Siecienski, a longtime resident of Stamford, CT, passed away peacefully at his home in Stamford on the morning of Tuesday, January 24, 2017 surrounded by his loving family. He was 83 years old. Stanley was born on October 8, 1933 and was one of three sons of the late John and Julia (Bastura) Siecienski.Stanley is survived by his devoted wife and caregiver of 53 years, Jean Siecienski (Welsh), his daughters; Sandra Mattioli and husband Harry, and Betty Barrows and husband Ralph, his four grandchildren; Mitch, Gloria and Matthew Mattioli and Kayla Barrows, his two brothers; John Siecienski (Delores) and Henry Siecienski (Margaret), and sister-in-law, Mamie Welsh. In addition to his parents Stanley was preceded in death by his brother-in-law, Matt Welsh. Stanley graduated from Stamford High School with the class of 1952, met Jean in 1959, and they married in 1963. Stan worked as a machinist at Pitney Bowes and Bunker Ramo Corporation for many years before his retirement."Stan the Man" was a true outdoorsman. He was a member of the Newtown Fish & Game club. He loved his hunting, fishing, camping and clamming in Rhode Island, and tending to his beautiful garden. He loved his many happy visits to Massachusetts, where he enjoyed his "Creamery" ice cream and a good game of Gin. He was an avid fan of the New England Patriots and his grandchildren - whose sporting events he faithfully attended throughout New England. He was truly their biggest fan, and he forged many wonderful relationships along the way. We will miss his engaging storytelling about the "one that got away", but smile at the thought of Stan's reunion with his faithful dog of 14 years, Buddy.Stanley's family will be receiving the condolences of friends and family on Friday, January 27, 2017 from 10am to 12pm at Bosak Funeral Home, 453 Shippan Avenue, Stamford, CT 06902. A memorial service will begin promptly at noon at the funeral home.In lieu of flowers the family encourages donations in Stanley's name be made to the Stamford High School Athletic Department, c/o James Moriarty, 55 Strawberry Hill Avenue, Stamford, CT 06902. The family has entrusted the arrangements to Bosak Funeral Home, 453 Shippan Avenue, in Stamford. If you care to leave an online condolence message you may visit the family guestbook on Facebook at www.facebook.com/bosakfuneralhome.

Life Legacy Stanley Edward Siecienski, a longtime resident of Stamford, CT, passed away peacefully at his home in Stamford on the morning of Tuesday, January 24, 2017 surrounded by his loving family. He was 83 years old. Stanley was born on... View Obituary & Service Information

The family of Stanley E. Siecienski created this Life Tributes page to make it easy to share your memories.