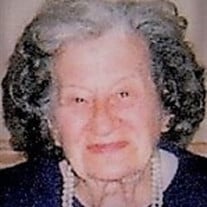 Stella Fox peacefully passed away at her home on April 6, 2017. She was born in Stamford, CT on April 20, 1921 to the late John Baldyga and Catherine Homa Baldyga, and was the beloved wife of Edward Fox who passed away in 1987. Stella was 95 years old. Stella graduated Stamford High School with the class of 1939 and was employed by Conde Nast and Yale & Towne. After she married she lived in Greenwich, CT for a few years before moving back to Stamford to raise her family and continue working at Zantow Ferguson Jewelers, where she worked until her retirement and the store’s closing. Stella was an active member of St. Bridget of Ireland R.C. Church where she founded the Senior Club and was its President for 28 years. She also served on the St. Bridget Advisory Board for a period of time, and was even elected “mother of the year” by the parish one year. She will also be missed by her many friends at the Glenbrook Senior Club, the Springdale Senior Club and the National Council. Stella was a loving and devoted mother to four sons; Thomas Fox of Corvallis, OR, Joseph Fox and his wife Joan of Lodi, CA, Richard Fox and his wife Joanne, of Monroe and Edward Fox of Stamford and is survived by four grandchildren; Casey, Matthew, Brian and Shannon. Stella’s family will be receiving the sympathy and condolences of friends and family on Monday, April 10, 2017 from 5pm to 8pm at Bosak Funeral Home, 453 Shippan Ave., Stamford, CT 06902. A mass of Christian burial will take place on Tuesday, April 11, 2017 at 10:00am at St. Bridget of Ireland R.C. Church, 278 Strawberry Hill Avenue, Stamford, CT 06902. The interment will immediately follow mass at St. Mary R.C. Cemetery in Greenwich, CT. The family has entrusted the funeral arrangements to Bosak Funeral Home, 453 Shippan Avenue, in Stamford. If you would like to leave a message of condolence online visit the family guestbook at bosakfuneralhome.com or on Facebook at facebook.com/bosakfuneralhome.

Stella Fox peacefully passed away at her home on April 6, 2017. She was born in Stamford, CT on April 20, 1921 to the late John Baldyga and Catherine Homa Baldyga, and was the beloved wife of Edward Fox who passed away in 1987. Stella was 95... View Obituary & Service Information

The family of Stella Fox created this Life Tributes page to make it easy to share your memories.