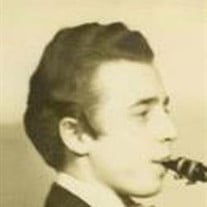 Stephen John Hudak, 89, formerly of Rocky Hill, East Hampton and Stamford CT passed away after a brief but courageous battle with bladder cancer. Steve was born in Stamford to the late Stephen Hudak and Anna Lipko Hudak. As a child, Steve was initially encouraged to become a dancer of tap, toe and ballet by his parents. He became quite accomplished at it but after a severe foot swelling related to a bout with rheumatic fever which caused permanent damage to his foot, dance was no longer an option. He found his calling in music. A friend offered him a saxophone which he could play easily by ear. After seeing a natural talent, he began taking music lessons both in CT and NY and started playing in non-union trios. He played Alto & Tenor Sax and Clarinet as well. Give him a piece of sheet music and he could read it like a book. In 1943, he had an audition with The Frank Dailey Band and got the job! This was the catalyst that began his career of traveling with the Big Bands of Vinnie Wilson, Jack Adams, Kenny Sargeant, and finally Louie Prima. He played his alto sax to celebrities such as Dean Martin, Jerry Lewis and Margaret Hamilton. He even had the chance to meet Frank Sinatra. Even though he had a passion for BeBop, Jazz and Swing, life on the road was not an easy one but, he had the chance to see many cities throughout the US. He actually turned down an offer from Tommy Dorsey to join his band for a tour in South America. He returned to playing in small group venues after being on the road for a number of years. Steve also worked at Sorenson, a division of Raytheon of Norwalk and Data Products in Stamford as an electronics inspector, retiring in 1989. He was a Life member of the Knights of Columbus, a member of the First Catholic Slovak Union for 50 years and a member of the American Federation of Musicians, Norwalk local 52. He was predeceased by his loving wife Anna Umile Hudak of 46 years in 2002 and by a niece, Laurie Sheaffer. He is survived by a daughter Cynthia Dravis and her husband Dan of East Hampton CT; a sister, Helen Sheaffer and her husband John of Shippensburg, PA; two nephews, Steven Sheaffer and his wife Celeste of FL and Johnny Sheaffer of Shippensburg PA; and by other close family members, Lawrence Nemchek of Stamford, Susan and Kevin O'Kane of Stamford, Theresa and Jess Szczesiul of Shelton and Tommy Nemchek, his wife Cathy and daughter Rachel of VT. His family would like to express their deepest appreciation to his special friend Joan, her supporting family and his extended family at THE LODGE AT COLDSPRING in Rocky Hill, CT. Where even there, he was in their choir....music was just a part of him. "Smile what's the use of crying, you'll find that life is still worthwhile if you just smile" - Charlie Chaplin. The family also wishes to extend a special thanks to Kathy Lundell of Caregiving by Kathy and to the nursing staff at the Chestelm Health and Rehab Center in Moodus CT as well as the nurses of the Middlesex Hospice program. In lieu of flowers, donations can be made to: Hungry for Music at : www.hungryformusic.org  At the request of the family, all services will be held private.

Stephen John Hudak, 89, formerly of Rocky Hill, East Hampton and Stamford CT passed away after a brief but courageous battle with bladder cancer. Steve was born in Stamford to the late Stephen Hudak and Anna Lipko Hudak. As a child, Steve was... View Obituary & Service Information

The family of Stephen John Hudak created this Life Tributes page to make it easy to share your memories.