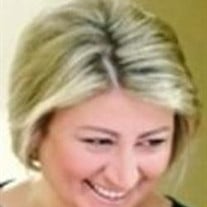 Tatyana G. Zimmerman, 49, passed away at the Stamford Hospital on the morning of February 1, 2015 after a hard-fought battle with cancer, with her daughter by her side. Tatyana was born in Kemerovo, Russia on September 27,1965, and was one of two children born to German and Galina Malakhovskie. She made her way to the United States in 2001, and settled in Stamford, CT, of which she has been a longtime resident. Growing up, Tatyana was a devoted daughter, sister, and friend. She graduated Kemerovo State Medical School and began her career as a cardiologist. She later became a director of the cardiac unit of the hospital in which she worked for 15 years. Tatyana was an inspiring physician, who was loved and respected by her colleagues and patients. After moving to the United States, she enjoyed a rewarding career as a nursing supervisor at the Greenwich Woods Rehab Center.  Tatyana spent her life in dedication to her daughter, for whom she had an unwavering and unconditional love. The two shared a special bond, and Tatyana's character will continue on shining through her. Tatyana had a powerful presence and exuded rare warmth and sincerity, which drew people to her. She had a unique ability to empathize with others, give sound advice, and comfort those around her. She was a strong and courageous person, an inspiration to many, who took life's struggles with a smile on her face. Described by her friends as a "ray of sunshine", she left a lasting light in the hearts of many. Tatyana is survived by her loving parents, German and Galina Malakhovskie, her brother, Yury Malakhovskiy, her daughter, Anastasiya Rogers, and her beloved son-in-law, Michael Rogers.  Tatyana's family will receive sympathy of friends and family on Thursday, February 5, 2015 from 2 - 4 p.m. and from 6 - 8 p.m. at the Bosak Funeral Home, 453 Shippan Avenue, Stamford, CT 06902. Father Vladimir Horoszczak will lead a Panahita Service beginning promptly at 7:30 p.m. A celebration of Tatyana's life to follow immediately after.  The family has entrusted the funeral arrangements to Bosak Funeral Home, 453 Shippan Avenue in Stamford. To offer your condolences online please visit www.bosakfuneralhome.com or on the funeral home Facebook page at www.facebook.com/bosakfuneralhome.

Tatyana G. Zimmerman, 49, passed away at the Stamford Hospital on the morning of February 1, 2015 after a hard-fought battle with cancer, with her daughter by her side. Tatyana was born in Kemerovo, Russia on September 27,1965, and was one... View Obituary & Service Information

The family of Tatyana G Zimmerman created this Life Tributes page to make it easy to share your memories.

Tatyana G. Zimmerman, 49, passed away at the Stamford Hospital...