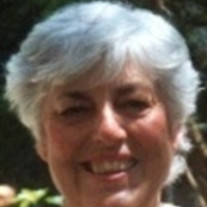 Life Legacy Teresa Ferrari, nee Cagiao, affectionately known as Terry to family and friends, passed away peacefully at her home in Riverside on Thursday, September 15, 2016. She was 88 years old. Terry was born January 5, 1928 in Brooklyn, NY and was one of five children born to the late Emanuel and Augustina Cagiao.Terry enjoyed spending time with all of her grandchildren and great grandchildren. She especially enjoyed cooking for her family and her time spent volunteering for Meals on Wheels over the course of many years. She also loved to read, finish crossword puzzles and follow the New York Mets.She is survived by her three children; Gary Ferrari, and his wife Julia Jansen, Robert Ferrari and Barbara Ferrari, and her husband Chris Ottinger. She will also be missed by her three grandchildren; Michael, Tiffany and Anneliese, her five great grandchildren; Isabella, Lena, Anthony, Violet and Lily, and many nieces, nephews and extended family. In addition to her parents, Terry was preceded in death by her beloved husband of 66 years, Bernard A. Ferrari, in 2014, and her four siblings; Pete, Manny, Gloria and Frank Cagiao. Terry will be sadly missed by all those who knew and loved her.The Ferrari family will be receiving the condolences of friends and family on Tuesday, September 20, 2016 from 4pm to 8pm at Bosak Funeral Home, 453 Shippan Avenue, Stamford, CT 06902. A funeral procession will leave the funeral home at 12 p.m. on Wednesday, September 21st for the interment at Putnam Cemetery in Greenwich. Friends and family may arrive at the funeral home at 11am.In lieu of flowers the family asks that you consider donating in Terry's name to: Abilis, 50 Glenville Street, Greenwich, CT, 06831 or online at www.abilis.us/support-us.html.The family has entrusted the funeral arrangements to Bosak Funeral Home, 453 Shippan Avenue, in Stamford. If you would like to leave an online condolence message you may visit the family guestbook on www.bosakfuneralhome.com or on Facebook at www.facebook.com/bosakfuneralhome.

Life Legacy Teresa Ferrari, nee Cagiao, affectionately known as Terry to family and friends, passed away peacefully at her home in Riverside on Thursday, September 15, 2016. She was 88 years old. Terry was born January 5, 1928 in Brooklyn,... View Obituary & Service Information

The family of Teresa Ferrari created this Life Tributes page to make it easy to share your memories.