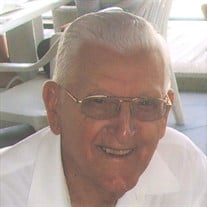 Monsignor Thaddeus F. Malanowski, lifelong resident of Stamford, Connecticut, passed away on January 23, 2020 surrounded by his loving family. Monsignor was born on November 30, 1922 to the late Thomas and Sophie (Goscienski) Malanowski. He was 97 years old at the time of his passing. Thaddeus “Uncle Ted” was a brother, uncle, and friend to many. Monsignor Malanowski was a former Deputy Chief of Chaplains of the United States Army. He was a Catholic priest and the first Polish-American to be in this position. He was an ordained Roman Catholic priest for the Diocese of Norwich and served at his home parish of Holy Name of Jesus Church in Stamford, CT following his retirement from active ministry. In 1973, he was given the title of Monsignor by Pope Paul VI. He was a retired Brigadier General in the United States Army for twenty five years. He was commissioned as an officer in the United States Army in 1949. From 1951 to 1954, he served with NATO as a member of the 43rd Infantry Division. Other assignments he was given include serving at Headquarters, United States Army Europe before he was named Deputy Chief of Chaplains with the rank of Brigadier General. He held this position until his retirement in 1978. Awards he has received include the Legion of Merit, the Army Distinguished Service Medal, the Meritorious Service Medal and the Army Commendation Medal with two oak leaf clusters. He was known for his major contributions in his work with the Hattian Health Foundation, where he served on the Haitian Health Foundation Board of Directors from 1985 to his passing. As well as on many more other organizations. He was also appointed the Chaplain for the Knights of Columbus, Saint Augustine Council #41 on Shippan Avenue in Stamford Connecticut where he served faithfully for over a decade. He will be truly missed by all who knew him. He is survived by his sister, Joan Galesky who resides in Charlottesville, VA, and pre-deceased by several brothers and sisters, as well as numerous nieces and nephews. Monsignor Malanowski’s family will receive the sympathy and condolences of relatives and friends at the Holy Name of Jesus Church, 325 Washington Blvd in Stamford at 4pm on Tuesday, January 28th and will be in repose until the Vigil Mass at 7pm; Monsignor Thomas W. Powers will be the celebrant, and Monsignor Nicholas V. Grieco will be the homilist. Bishop Michael R. Cote, Bishop of Norwich, will celebrate the Funeral Mass at 11am on Wednesday, January 29th, and Monsignor Leszek T. Janik, Vicar General of the Diocese of Norwich, will be the homilist. His interment will follow at St. John’s Catholic Cemetery, 25 Camp Avenue, in Darien CT. The family has entrusted the funeral arrangements to Bosak Funeral Home, 453 Shippan Avenue, in Stamford, CT. If you would like to leave a condolence message for the family you may visit the guestbook on bosakfuneralhome.com or on Facebook at facebook.com/bosakfuneralhome.

Monsignor Thaddeus F. Malanowski, lifelong resident of Stamford, Connecticut, passed away on January 23, 2020 surrounded by his loving family. Monsignor was born on November 30, 1922 to the late Thomas and Sophie (Goscienski) Malanowski. He... View Obituary & Service Information

The family of Msgr. Thaddeus F. Malanowski created this Life Tributes page to make it easy to share your memories.