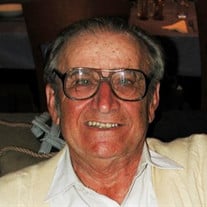 Tom Finiw passed away peacefully in his sleep on Sunday, November 13, 2016, after a brief illness. He is predeceased by his wife Mary Andreychin Finiw, who died 22 years earlier on November 14, 1994. He is survived by his sister Anastasia Korman; children Alexandra Finiw, Ronald Finiw and MaryAnn Finiw; daughter-in-law Marisa Lago and son-in-law Nicholas Fountas; grandchildren Maria Fountas and Helena Fountas. He lived 93 years full of hope and faith, always kind and thoughtful, despite the hardship of his early years. Born in Pavlikewka, Ukraine, he was forcibly taken to Germany during World War II. After the war, he met his wife Mary in the Displaced Persons Camp at Berchtesgaden, Germany. They came to the United States aboard the S.S. General Macrae and eventually settled in Stamford, CT, where Tom worked at Pitney Bowes as export shipping coordinator for 38 years, retiring in 1988. His family and friends know him as Mr. Fix-It, always generous with his time and craftsmanship. He was a skilled artisan whose attention to detail made everything he touched into a work of fine art. He was also an expert tailor, whose sewing projects included altar-cloths for St. Vladimir’s Cathedral. He was happy to share his joy and gratitude in life. His words and gestures of appreciation touched people more than he knew. Tom had an amazing life and never lost his optimism or his priorities--making a good and safe life for his wife, children and grandchildren. He was so lucky to be able to enjoy the fruits of all his hard work for so many years. His life began in such hardship, but its length and richness were a living testament to the triumph of love over all. He has been an inspiration to everyone he met. Family will receive relatives and friends on Friday, November 18th from 4 pm - 8 pm at the Bosak Funeral Home, 453 Shippan Ave in Stamford, CT. A funeral service will take place at 10 am on Saturday, November 19th at St. Vladimir’s Cathedral, 24 Wenzel Terrace, in Stamford. His burial will follow at Fairfield Memorial Park, 230 Oaklawn Avenue, in Stamford. If you would like to leave an expression of sympathy for the family online, please sign the guestbook at www.bosakfuneralhome.com or visit the funeral home Facebook page at www.facebook.com/bosakfuneralhome to share memories of with his family. Вічная Йому Пам'ять. May his memory be eternal.

Tom Finiw passed away peacefully in his sleep on Sunday, November 13, 2016, after a brief illness. He is predeceased by his wife Mary Andreychin Finiw, who died 22 years earlier on November 14, 1994. He is survived by his sister Anastasia Korman;... View Obituary & Service Information

The family of Tom Finiw created this Life Tributes page to make it easy to share your memories.

Tom Finiw passed away peacefully in his sleep on Sunday, November...