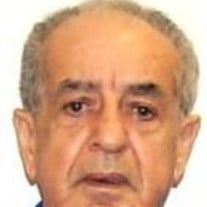 Tony Pappas, 87, of Fairfield, and longtime resident of Stamford, CT, passed away on Sunday, September 28, 2014 at Bridgeport Hospital. He was born January 13, 1927 in Stamford to the late Achillis and Panayota (Adamis) Papavasilios. Tony was raised in Stamford, CT and enlisted in the U.S. Navy where he served from 1944 to 1946 during World War II. Upon his honorable discharge, he returned home and went to work as a machinist at Yale & Town, and then as an inventory planner for Dichello Beverage Distributors. Tony was actively involved in and devoted to his Greek Orthodox faith, and for many years he served on the parish council of The Greek Orthodox Church of the Annunciation in Stamford. Tony will be sadly missed by all those who knew and loved him, and will live on forever in their hearts. Tony is survived by his beloved wife; Barbara (Donnelly) Pappas, his daughter; Debbie Martylewski (Ron), his two grandchildren; Deena and Amber Martylewski, stepchildren; Mark Fuller and Sue Fuller, sisters; Joan Bolanis and Helen Coker, and several nieces and nephews. In addition to his parents, Tony was preceded in death by a son; Anthony Pappas, a sister; Sally Pappas Perna, and his brothers; Roger and Charlie Pappas.  The Pappas family will receive the condolences of friends and family on Friday, October 3rd from 4 p.m. to 8 p.m., with a Trisagion service at 7:30 p.m., at Bosak Funeral Home, 453 Shippan Avenue, in Stamford. A funeral service will be celebrated at 10 a.m. on Saturday, October 4th at The Greek Orthodox Church of the Annunciation, 1230 Newfield Avenue, in Stamford, CT. Rev. Fr Evangelos Evangelidis will officiate the services. Entombment will immediately follow at Woodland Cemetery, 66 Woodland Place, in Stamford. The family has entrusted the funeral arrangements to Bosak Funeral Home, 453 Shippan Avenue, in Stamford. If you care to leave a condolence message online please visit the family guestbook on www.bosakfuneralhome.com or on the funeral home Facebook page

Tony Pappas, 87, of Fairfield, and longtime resident of Stamford, CT, passed away on Sunday, September 28, 2014 at Bridgeport Hospital. He was born January 13, 1927 in Stamford to the late Achillis and Panayota (Adamis) Papavasilios. Tony was... View Obituary & Service Information

The family of Tony Pappas created this Life Tributes page to make it easy to share your memories.

Tony Pappas, 87, of Fairfield, and longtime resident of Stamford,...