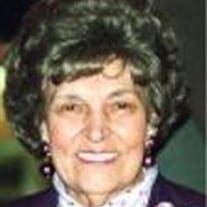 Vilma Nemchek Fowler, 99, lifelong resident of Stamford, CT, peacefully passed away at her home on the morning of Tuesday, January 6, 2015.  Vilma was born on June 23, 1915 and was one of nine children born to the late Joseph and Bridget (Slimak) Nemchek. Vilma grew up in the Cove section of Stamford and attended Stamford public schools.  In 1936 Vilma married her late husband, Clarence Fowler, and settled in Stamford.  She was a tireless worker who worked until she was 90 years old.  Over the course of 81 years Vilma worked for the Roger Smith Hotel and various country clubs throughout Fairfield County.  Most recently Vilma worked for Catholic Charities as the site manager at a senior residence despite being older than many of the residents she served.  She was an avid reader and liked to keep herself mentally sharp by doing crossword puzzles and the daily jumbles.  The most important things to Vilma were her family and her church.  She loved both unconditionally.  She was a loving and dedicated daughter, wife and mother, and a faithful parishioner of St. Benedict R.C. Church.  The church where the Nemchek family was one of the founding families.   Vilma is survived by her children; Robert Fowler (Carolyn), of Norwalk, CT, Dennis Fowler (Jackie), of Stuart, FL, Veronica Fowler, of Stamford and Valerie Fowler, of Greenlawn, NY, fourteen grandchildren and nineteen great-grandchildren.  She is also survived by her brothers; Lawrence and Edward Nemchek, both of Stamford.  In addition to her parents, Vilma was preceded in death by a son, Thomas G. Fowler, a grandson, David Fowler, four brothers; Frank, Joseph, Jr., Al and John Nemchek, and two sisters; Mary McRedmond amd Bridget Thomas. The Fowlers will receive the condolences and sympathy of friends and family on Friday, January 9th from 4pm to 8pm at Bosak Funeral Home, 453 Shippan Avenue, Stamford, CT 06902.  A Mass of Christian Burial will be celebrated on Saturday, January 10th at 10 am at St. Benedict Church, 1 St. Benedict Circle, in Stamford.  The interment and committal service will immediately follow mass at St. John R.C. Cemetery in Darien. In lieu of flowers, donations may be made to St. Benedict Church, 1 St. Benedict Circle, Stamford, CT 06902.  The family would like to extend special thanks to all of the wonderful caregivers who cared for Vilma over the course of the past 6 years.  We will be forever grateful for the compassion and love you gave to our mother. The family has entrusted the funeral arrangements to Bosak Funeral Home, 453 Shippan Avenue, in Stamford.  If you care to leave an online condolence message please visit the family guestbook on www.bosakfuneralhome.com or on the funeral home Facebook page at www.facebook.com/bosakfuneralhome.

Vilma Nemchek Fowler, 99, lifelong resident of Stamford, CT, peacefully passed away at her home on the morning of Tuesday, January 6, 2015.  Vilma was born on June 23, 1915 and was one of nine children born to the late Joseph and Bridget (Slimak)... View Obituary & Service Information

The family of Vilma K Fowler created this Life Tributes page to make it easy to share your memories.