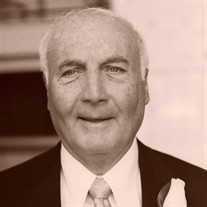 Vincent J. Lostaglio, 84, passed away peacefully at home in Stamford on Monday, October 26, 2020. He was born on April 12, 1936 as the youngest of four children to Italian immigrants, he lived his childhood and young adult years in New York City, on the Lower East Side and what is now called the East Village. Passing the entrance examinations to Stuyvesant High School in 1950 changed his life, setting him on a career of high academic and professional achievement. After Stuyvesant, he attended New York University (NYU) for his undergraduate degree and then obtained a PhD in physical chemistry in 1962. An early fascination with the speed of chemical reactions led to a long history of work in the field of catalysts and other reactants. His first job after his PhD was at American Cyanamid in Stamford, and he remained with various firms and subsidiaries of the company for his entire career. In the 1970’s, he was involved in the development of the Cyalume chemiluminescence compound, most famously used in light sticks. In the late 1970’s and throughout the 1980’s, he worked on the team that developed the Cyanamid version of the catalyst used in the automotive catalytic converter, removing CO and hydrocarbons. He was named on several patents and in multiple papers related to automotive and later oil refinery catalysts, often with his frequent collaborators Don Carruthers and Pete Shukis. He ended his professional career as the first lead of Criterion Catalyst, now part of Shell Oil Company, which remains a leading company in the use of catalysts to remove pollutants and create cleaner air and cleaner energy. After retirement, he became well known for his love of walking, covering 7 miles or more at a fierce and rapid pace. He initially preferred the track at Westhill High School, then moved to various paths at Cove and in Shippan. He was a lifelong NY Knicks fan and was deeply committed to the annual NCAA basketball tournament, and a vocal lifelong fan of the Yankees. His love of music ranged extremely wide and varied, from Hoagy Carmichael to Patti Page to Madonna. He had strong and passionate opinions about Italian food and various Stamford area restaurants, and was firmly convinced of the values of the Roku media device. Vince is survived by his wife Terry Gillin-Lostaglio, his children — Keith (and wife Suzanna), Michelle Houle (and husband Bob), Jill, and Susan, his two stepsons Rob and Brian Gillin (and wife Beth), and his grandchildren Josh and Sarah Houle, Meredith and Isabella Lostaglio, and Cal Vincent Gillin. In lieu of flowers, please donate to the Food Bank of Lower Fairfield County (www.foodbanklfc.org). Vince’s family will receive family and friends on Sunday, November 1st (“Tutti Santi”) at the Bosak Funeral Home, 453 Shippan Avenue in Stamford, from 2pm to 5pm. A Funeral Mass will be celebrated on Monday, November 2nd (“Tutti Morti”) at Sacred Heart Church, 37 Schuyler Avenue in Stamford at 10:30am. His burial will be held private. In compliance with state mandates and the safety of all those attending the services, it is mandatory to wear face coverings and maintain social distancing, while attending all funeral services. If you would like to leave a condolence message online please visit the family guestbook to share memories with his family at www.bosakfuneralhome.com or www.facebook.com/bosakfuneralhome.

Vincent J. Lostaglio, 84, passed away peacefully at home in Stamford on Monday, October 26, 2020. He was born on April 12, 1936 as the youngest of four children to Italian immigrants, he lived his childhood and young adult years in New York... View Obituary & Service Information

The family of Vincent J. Lostaglio created this Life Tributes page to make it easy to share your memories.

Vincent J. Lostaglio, 84, passed away peacefully at home in Stamford...