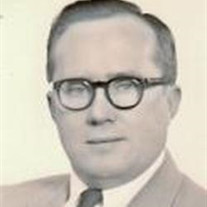 Wallace V. Urbanowicz, 91, of Newport, RI, and a former longtime resident of Stamford , passed away on Saturday, January 11th. Born in Norwalk, CT on September 27, 1922, Wallace was one of seven children born to the late Stanley and Amelia (Saffago) Urbanowicz. Mr. Urbanowicz grew up in Stamford's South End and attended Stamford schools. Following graduation from high school he enlisted in the United States Army where he served honorably from 1943 to 1945 during World War II. During his time in the army, Wallace graduated Electrical School while stationed at Ft. Bliss, TX and Radio Operator School in Norther Africa. Mr. Urbanowicz served as a Radio Operator and saw action in Southern France which earned him the World War II Victory Medal and the European African Middle Eastern Theater Campaign Ribbon with 1 Service Star. Wallace embodied all of the characteristics associated with the brave men of the Greatest Generation - which are courage, a sense of selfless service country, modesty and a quiet confidence. Wallace will be sadly missed by all those who knew and loved him. Following his time in the service, Wallace returned home to Stamford and went to work as an Electrician for the City of Stamford where he was a loyal and dedicated employee over the course of his 25 year career. During that time Mr. Urbanowicz also acted as a union official with the A.F.C.S.M.E., was a very active member of the Stamford Republican Party and dedicated to the Young Republicans of Stamford. Wallace is survived by a sister, Irene Ohrn, of Darien, and several nieces, nephews, and grandnieces and grandnephews. In addition to his parents, Wallace was preceded in death by his four brothers; Edward, Stanley, George (Julius) and John Urbanowicz,, and his sister; Regina Urbanowicz. The family will receive family and friends on the morning of Saturday, January 18th from 9:30 a.m. to 10:30 a.m. at Bosak Funeral Home, 453 Shippan Ave., Stamford, CT, 06902, with a procession leaving the funeral home at 10:45 a.m. for a Mass of Christian Burial at 11 a.m. at Holy Name of Jesus Church, 325 Washington Blvd., in Stamford. At his family's request, Wallace's interment will be kept private. Mr. Urbanowicz's family has entrusted the funeral arrangements to Bosak Funeral Home, 453 Shippan Avenue, in Stamford. If you care to leave an online condolence message please sign the family guestbook found at www.bosakfuneralhome.com or visit Bosak Funeral Home on Facebook at www.facebook.com/bosakfuneralhome.

Wallace V. Urbanowicz, 91, of Newport, RI, and a former longtime resident of Stamford , passed away on Saturday, January 11th. Born in Norwalk, CT on September 27, 1922, Wallace was one of seven children born to the late Stanley and Amelia (Saffago)... View Obituary & Service Information

The family of Wallace V Urbanowicz created this Life Tributes page to make it easy to share your memories.

Wallace V. Urbanowicz, 91, of Newport, RI, and a former longtime...