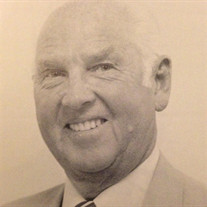 Walter (Flea) G. Kulowiec, a native of Stamford and former long-time resident, passed away peacefully on April 18, 2019 at Mansfield Center for Nursing and Rehabilitation where he resided for the past 5 years. He was born in Stamford on April 23, 1924 and was the son of the late John and Sophie (Nachilly) Kulowiec. Walt was predeceased by his loving wife, Ella (Staveski), in 2004. He was 94 years old at the time of his passing. In 1942, at the age of 18, Walter was spotted by a scout for the Boston Red Sox and was signed by the team to play in the Canadian American League. However, he would not make it to spring training the following year due to his being drafted into the service in 1943 where he served with the 150th Army Combat Engineers. While serving in WWII, Walter fought in the Battle of the Bulge and was awarded a Purple Heart for his valor and courage. In 1945 he was wounded in Luxembourg and received an honorable discharge from the service. Despite sustaining a significant leg injury while fighting overseas, Walter returned home determined to resume his baseball career. He was signed in 1947 by the Pittsburgh Pirates and played on their Fargo farm team where he set many records in the Northern League. Following his time playing baseball, Walter worked as a butcher and later as a machinist for Pitney Bowes, where he worked until his retirement in 1987. He was a member of Holy Name Athletic Club, the Stamford Old Timers Athletic Association and was a communicant and long-time parishioner of Holy Name of Jesus Church. Walter is survived by his beloved daughters; Donna Evan and husband David, of Storrs, CT and Carol Ames and husband David, of Arlington, VA, granddaughter; Lela Ames and husband Peter Tolsdorf, of Arlington, VA, and their sons Aidric and Finn, grandson; Tyler Ames, of Long Island City, NY, and his brother; John Kulowiec. In addition to his wife and parents, Walt is predeceased by his siblings; Stanley, Joseph and Edmund Kulowiec, and Emily Symeon. A wake will be held for Walter on Thursday, April 25th, from 4pm to 7pm, at Bosak Funeral Home, 453 Shippan Avenue, Stamford, CT 06902. A mass of Christian burial will take place on Friday, April 26th at 11am at Holy Name of Jesus R.C. Church, 325 Washington Blvd., Stamford, CT 06902. The interment with military honors will immediately follow mass at Woodland cemetery in Stamford. Memorial donation may be made to the Holy Name of Jesus Restoration Fund, 4 Pulaski St., Stamford, CT 06902 or to the Mansfield Center for Nursing and Rehabilitation “Recreation Fund”, 100 Warren Circle, Storrs, CT 06268. The family has entrusted Walt’s final arrangements to Bosak Funeral Home, 453 Shippan Avenue, in Stamford. If you would like to leave an online condolence message for the family visit the family guestbook on bosakfuneralhome.com or on Facebook at facebook.com/bosakfuneralhome.

Walter (Flea) G. Kulowiec, a native of Stamford and former long-time resident, passed away peacefully on April 18, 2019 at Mansfield Center for Nursing and Rehabilitation where he resided for the past 5 years. He was born in Stamford on April... View Obituary & Service Information

The family of Walter G. Kulowiec created this Life Tributes page to make it easy to share your memories.