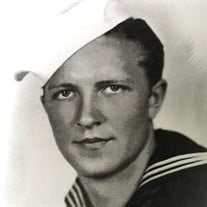 Walter Lohotsky of Stamford Connecticut passed away in peace on Sunday September 23 at the age of 92. Walt was born in New York City and was raised in Banksville Connecticut, then the hinterlands of Greenwich, complete with a two-room schoolhouse and plenty of swimming holes. At age 18 he found himself in the Pacific aboard the USS Earl V. Johnson, watched torpedoes pass under his ship, and fondly remembered the conclusion of the war from Leyte Gulf in the Philippines. Upon returning home, he married his beloved Mary and enjoyed a 62 year marriage. He proudly served as a member of Stamford Fire Rescue for 42 years, starting his post on the day that the Connecticut Turnpike opened in January 1958. He operated the largest piece of fire apparatus the City owned, and received multiple commendations over the years. He also worked for the Town of Darien until he was 85, and could be counted on to operate any truck or excavator that came his way. He inherited a green thumb and handyman spirit from his parents Tessie and Theodore, and always grew a large vegetable garden, when was not repairing some implement. He was likewise predeceased by his sister Sophie and brothers Peter and Nicholas. He will be fondly remembered by his children Michelle, her husband Gary and daughter Jacqueline, and by his son Walter, his wife Patricia, and children Kathryn and Brian. The family further thanks the staff of The Nathaniel Witherell for their kind care and compassion. The family will be receiving the condolences and sympathy of friends and family on the evening of Wednesday, September 26th from 6pm to 8pm at Bosak Funeral Home, 453 Shippan Avenue, Stamford, CT 06902. A funeral service will be take place on the morning of FRIDAY, September 28th at 10am at St. Vladimir Ukrainian Catholic Cathedral, 24 Wenzel Terrace, Stamford, CT 06902. The interment with military honors will immediately follow the service at St. Mary R.C. Cemetery in Greenwich, CT. In lieu of flowers please consider a memorial donation to St. Vladimir Ukrainian Catholic Church, 24 Wenzel Terrace, Stamford, CT 06902. The family has entrusted the final arrangements to Bosak Funeral Home, 453 Shippan Avenue in Stamford, CT. If you care to leave a message of condolence for the family online you may visit the guestbooks on www.bosakfuneralhome.com or on Facebook at www.facebook.com/bosakfuneralhome.

Walter Lohotsky of Stamford Connecticut passed away in peace on Sunday September 23 at the age of 92. Walt was born in New York City and was raised in Banksville Connecticut, then the hinterlands of Greenwich, complete with a two-room schoolhouse... View Obituary & Service Information

The family of Walter Lohotsky created this Life Tributes page to make it easy to share your memories.

Walter Lohotsky of Stamford Connecticut passed away in peace...