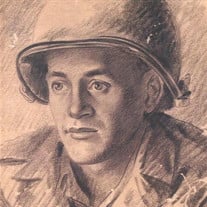 Charles F. Maziarek, affectionately known to friends and family as “Whitey”, passed away at Stamford Hospital on Saturday, August 18, 2018. Born in Seymour, CT on April 1, 1921 to the late Joseph and Marie Maziarek, Whitey was a longtime resident of the Cove section of Stamford, CT. He was preceded in death by his beloved wife, Evelyn, in 2015 and is survived by his two daughters; Lorena Houseworth and husband Christopher, and Mary Cavalieri, and three grandchildren; Michael, Christopher and Michelle Cavalieri. In addition to his wife, Whitey was preceded in death by his son-in-law, Ralph Cavalieri, M.D. Whitey was a master craftsman and woodworker. He worked at Maziarek & Sons Millwork, which was the custom woodworking shop established by his father, Joseph, in 1924. The shop was originally located on Dean Street and later, Euclid Avenue, both being based in “the Cove”. Whitey proudly served his country in the U.S. Army during WWII. He fought at the Battle of the Bulge and was awarded the Bronze Star medal for his courage and valor in service. Whitey enjoyed traveling in his Winnebago with his beloved Evelyn, visiting as many states as they could get to – including Alaska. As a lifelong member of the Fraternal Order of Eagles (F.O.E.), Whitey also liked to visit F.O.E. clubs throughout the region and country. Friends and relatives may offer their sympathy and condolences on the morning of Saturday, September 1st from 9am to 10:30am at Bosak Funeral Home, 453 Shippan Avenue, in Stamford. The F.O.E. members will conduct a brief ceremony followed by a prayer service to take place at the funeral home at 10:30am. A procession will leave the funeral home immediately after the prayer service for the interment, with military honors, at St. John R.C. Cemetery in Darien. In lieu of flowers, donations in Whitey’s name may be made to the Jimmy Durante Children’s Fund, F.O.E. Charity Foundation, 1623 Gateway Circle South, Grove City, OH 43123 or online at www.foe.com/Charities/Donate. The Maziarek family has entrusted the funeral arrangements to Bosak Funeral Home, 453 Shippan Avenue, in Stamford. If you care to leave a condolence message online please visit the family guestbook on www.bosakfuneralhome.com or on the funeral home Facebook page at www.facebook.com/bosakfuneralhome.

Charles F. Maziarek, affectionately known to friends and family as &#8220;Whitey&#8221;, passed away at Stamford Hospital on Saturday, August 18, 2018. Born in Seymour, CT on April 1, 1921 to the late Joseph and Marie Maziarek, Whitey was a... View Obituary & Service Information

The family of Whitey Maziarek created this Life Tributes page to make it easy to share your memories.