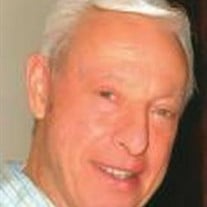 William Campbell Baldauf, 77, of Norwalk, passed away peacefully at home on Monday, April 7, 2014, with his family by his side.  He was born February 11, 1937 to the late William and Pauline (Semsel) Baldauf. Bill was born in Stamford, CT and grew up in Rowayton, CT.  He attended Norwalk public schools and graduated from Norwalk High School with the class of 1955.  Following high school, Bill joined the Naval Reserves where he served a six year commitment, and began his 35 year career with SNET as a Linesman/Installer.  Bill enjoyed his work and loved the camaraderie he shared with his coworkers.  So much so that, after his retirement in 1995, he would meet and have breakfast with his SNET buddies every Monday morning at the Norwalk Duchess to reminisce and share stories.  Throughout his time at SNET, Bill was involved in the Pioneer Employee Group whose purpose was to perform community outreach on behalf of the company.  He was very proud to be a part of an organization that helped people and benefited the community as a whole.    Bill was an avid boater who enjoyed spending time on the Sound with his family.  They would waterski, go clamming and picnic on one of the islands.  He was also a model train enthusiast.  In his later years Bill enjoyed traveling to all part of the country and abroad, Alaska, Hawaii, Colorado, Panama and Czech Republic to name a few.  But his favorite trip was to Maine especially to locations where he was able to “moose watch”.  Over the course of his travels, Bill would collect many different items related to his affinity for moose.  He also loved making home videos of his travels and his family under his signature production company “Billy B Productions”.  Above all else, Bill loved spending time with his family, especially his grandchildren. Bill is survived by his loving daughter; Leslie C. Pokora, and her husband Kenneth, of Wilton, CT, his beloved grandchildren; Stephanie E. Pokora, Stacy K. Pokora and Kenneth R. Pokora, Jr., his sister; Barbara Rice, of Chester, NH, and his first wife and mother of his daughters; Carol J. Kelly, of Ft. Pierce, FL, who was Bill’s caregiver and companion during his time of need prior to his passing.  In addition to his parents, Bill was preceded by the deaths by his daughter: Kim Chiappetta, and his grandson; Matthew Chiappetta who were also very dear to his heart.    A memorial service for Bill will take place on Friday, April 25th at 11 a.m. at the First Congregational Church on the Green, Park and Lewis Streets, Norwalk, CT 06851.  Reverend Frank Newsome will officiate. In lieu of flowers, donations in Bill’s name may be made to: The Connecticut Hospice, Inc., 1 Park Street, Norwalk, CT 06851. Mr. Baldauf’s family has entrusted the funeral arrangements to Bosak Funeral Home, 453 Shippan Avenue, in Stamford.  If you would like to leave an online expression of sympathy for the family, please sign the guestbook on www.bosakfuneralhome.com or visit the funeral home on Facebook at www.facebook.com/bosakfuneralhome.

William Campbell Baldauf, 77, of Norwalk, passed away peacefully at home on Monday, April 7, 2014, with his family by his side.  He was born February 11, 1937 to the late William and Pauline (Semsel) Baldauf. Bill was born in Stamford, CT and... View Obituary & Service Information

The family of William Campbell Baldauf created this Life Tributes page to make it easy to share your memories.