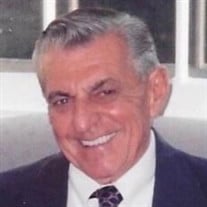 WILLIAM KESNICK passed away peacefully on Thursday, July 24, 2020 at the age of 96 and was fondly remembered by friends as Bill or Willie. Bill was born in Bridgeport, CT to the late John and Johanna (Telep) Kesnick and moved to Stamford where he has resided since his youth. After graduating from Stamford High School in 1941, Bill enlisted in the U.S. Navy with his lifelong friend Ted Guzda. He participated in many convoy missions between New York, Trinidad and Cuba. On the D-day Invasion of Normandy, both Bill and Ted were aboard USS PC 552, a patrol craft, where Bill served as a Coxswain. In January 1945, Bill was honorably discharged and settled down in Stamford, CT. Bill was married to Vera Kiselewich, his high school sweetheart, for 50 years and was the sole proprietor of the Waterside Liquor Store for more than 40 years. You could always count on a handful of his childhood friends being at the store at any time of the day keeping Bill company during his twelve-hour workday. Bill is survived by two children: Jerry (Darlene) Kesnick of Montgomery, OH and Kathryn (Nicholas) Kobbs of Stamford, CT along with four grandchildren: Christine and Michael Kesnick and Alexander and Thomas Kobbs as well as several nieces and nephews. He was predeceased by his loving wife Vera, his sister Dorothy Sawicki and granddaughter Kimberly Kesnick. Bill had many friends and was loved by one and all. He will be remembered most for his love of family and friends and life in Stamford. Someone so special and dear to us will never be forgotten. Memory Eternal! Please consider making a donation in his memory to: Homes for our Troops at https://www.hfotusa.org/ . Family will receive relatives and friends on Tuesday, July 28th from 4pm to 8pm with Panahida Services to be celebrated at 6pm, at the Bosak Funeral Home, 453 Shippan Avenue, in Stamford. His burial service will be held at 11am on Wednesday, July 29th at Woodland Cemetery, 66 Woodland Place, in Stamford, CT. In compliance with state mandates, those attending the services must wear face coverings and maintain social distancing. If you would like to leave a condolence message online please visit the family guestbook at www.bosakfuneralhome.com or at www.facebook.com/bosakfuneralhome to share memories with his family.

WILLIAM KESNICK passed away peacefully on Thursday, July 24, 2020 at the age of 96 and was fondly remembered by friends as Bill or Willie. Bill was born in Bridgeport, CT to the late John and Johanna (Telep) Kesnick and moved to Stamford where... View Obituary & Service Information

The family of William J. Kesnick created this Life Tributes page to make it easy to share your memories.