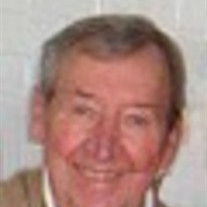 William Paul Symanko, 91, entered into eternal peace on Wednesday May 17th, 2017. He was surrounded by his loving family at his home in Stamford, CT. William was born on October 21st, 1925 to Mary Plazner Symanko and Paul Symanko in Stamford, CT. William was a decorated World War II veteran who served from France to the Czech border with the 89th Combat Infantry Division, the “Rolling W”. William was a Corporal receiving the Combat Infantryman Badge for frontline duty which he was extremely proud of. He also received a Bronze Star for heroic and meritorious service in the Battle of the Rhine and numerous battle stars and ribbons. At the end of the war he served in the Army of Occupation. He was honorably discharged in May of 1946. William was a licensed master plumber and a 63 year member of Plumbers and Pipefitters Local 777. He was a charter member of St. Leo’s Parish in Stamford, Connecticut. He is survived by his loving wife of 69 years, Barbara Cerulli Symanko, his 3 children, Lawrence Allen Symanko and wife Cynthia Shulga, Susan Symanko Ely, and Jacqueline Symanko Williamson and husband Scott Williamson. He is also survived by his 6 loving grandchildren, Justin William Ely, Sage Alexandra Williamson, Brooke Ely Miller and husband Robert Miller, Evan Scott Williamson, Logan Paul Williamson, and Lara Gabrielle Ely, as well as many nieces and nephews. He was predeceased in death by his mother, Mary Plazner Symanko, his father, Paul Symanko, his brothers Michael, George, and Alexander, his sisters Olga Symanko Marcel, Nettie Symanko Harry, and Helen Symanko DeVincent, and his son-in-law Kenneth Norman Ely. Known to many as Bill and lovingly to his grandchildren as “Pop”, he was an extraordinary man who shared his time and talent with all who knew him. He was devoted to his family and grandchildren, who he greatly adored, playing with them, laughing with them, and instilling a legacy that will live on through all the lives he touched. Bill was a beloved son, brother, husband, father, grandfather, uncle and friend to many. His memory will live on in our hearts as we remember him for his sense of direction, his story telling, and his handy man skills, but most importantly his graciousness, his kind-heart, and his ability to put a smile on anyone’s face. A mass in celebration of William’s life will be held on Tuesday, May 23rd, 2017 at St. Leo’s Church, 24 Roxbury Road, Stamford, CT. 06902 at 10:30 AM. In Lieu of flowers, memorial donations may be made to Trinity Catholic High School Scholarship Fund, 926 Newfield Avenue, Stamford, CT. 06905 in William’s memory. The family has entrusted William’s final care to Bosak Funeral Home, 453 Shippan Avenue, in Stamford, CT. If you would like to leave a condolence message online you may visit the family guestbook at www.bosakfuneralhome.com or on Facebook at www.facebook.com/bosakfuneralhome.

William Paul Symanko, 91, entered into eternal peace on Wednesday May 17th, 2017. He was surrounded by his loving family at his home in Stamford, CT. William was born on October 21st, 1925 to Mary Plazner Symanko and Paul Symanko in Stamford,... View Obituary & Service Information

The family of William P. Symanko created this Life Tributes page to make it easy to share your memories.