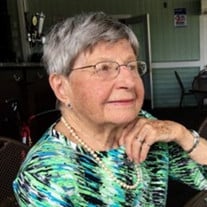 Winifred Skibinski, age 92, died September 28, 2016. She was born in the Byram section of Greenwich, CT on August 18, 1924 to the late Andrew and Kathryn Sroka Sobeski. She attended New Lebanon School and graduated from Greenwich High School in June 1942 with a business degree. She was employed as an executive secretary for Thermix Engineering Co in Greenwich. During the war years, she was a nurses’ aid at Greenwich Hospital. After marrying Henry J. Skibinski on November 4, 1950 at Sacred Heart Church in Byram, she moved to Stamford, Henry’s hometown. She became a parishioner at Holy Name of Jesus Church where she was a lector and a Eucharistic Minister. She donated many volunteer hours at various affairs at the church. She was a member of the Rosary Society. Winnie was the second woman to join the Holy Name Athletic Club, where she was recording secretary for over twelve years. She is survived by her children, Stephen (Lyn) of Bridgewater, MA; Kathryn (Sam) Wuhrer of Milford, CT; and Susan (Rick) Hudson of Wilton, CT; seven grandchildren and by many nieces and nephews. In addition to her beloved husband of sixty-three years, she was predeceased by her parents; two sisters, Josephine Musor and Sophie Roman; and a brother, Joseph Sobeski. There will be no calling hours. A Mass of Christian Burial will be celebrated on Monday, October 3rd at 11am at the Holy Name of Jesus Church, 325 Washington Blvd, in Stamford, CT. Her burial will follow at St. John RC Cemetery in Darien, CT. In lieu of flowers, the family asks that you consider a donation to the: Holy Name of Jesus Restoration Fund, 4 Pulaski Street, Stamford, CT 06902 or http://www.holynamestamford.org/ The family has entrusted the funeral arrangements to Bosak Funeral Home, 453 Shippan Avenue, in Stamford. If you would like to leave an online condolence message please visit the family guestbook on www.bosakfuneralhome.com or on Facebook at www.facebook.com/bosakfuneralhome.

Winifred Skibinski, age 92, died September 28, 2016. She was born in the Byram section of Greenwich, CT on August 18, 1924 to the late Andrew and Kathryn Sroka Sobeski. She attended New Lebanon School and graduated from Greenwich High School... View Obituary & Service Information

The family of Winifred Skibinski created this Life Tributes page to make it easy to share your memories.