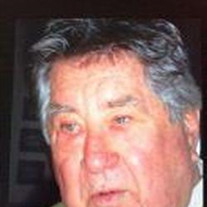 Zolton Andrew Benyus, Sr. passed away peacefully on Thursday, January 9, 2014 after a short illness surrounded by his family and friends at home, as he had wished. He is survived by his son Ronald G. Benyus as well as his son Zolton A. Benyus, Jr., (Miriam) and his grandson Tucker A. Benyus, his sister Priscilla Margie Kostezak of Ventura, California, his nephew Stephen Kostezak and his niece Beverly Rattray, both of California. He was predeceased by his wife Olga Parahus Benyus and his sister Helen Staff. Mr. Benyus was born in Bridgeport, Connecticut on September 7, 1920, to Mary Bodi Benyus and Andrew Benyus. He married Olga Parahus and moved to Stamford where they raised their sons. After his wife’s demise, he spent his winters for a number of years in Naples, Florida. Beginning his working years with Bullards in Bridgeport as a Purchasing Agent, he subsequently became the Eastern Division Purchasing Manager for Armstrong Rubber Company, a position from which he retired in 1981 after 25 years of service. After retirement he served on the Board of Trustees of the First Presbyterian Church in Stamford and was President of the Garden Manor Condo Association in Naples for six years and thereafter as a member at large on its Board of Directors. He was also an active member of the Italian Center Men’s Club of Stamford. He enjoyed golf, dining out and the beauty of nature. He especially appreciated the sun, sand and warm Gulf waters of Naples with his 8th Avenue gang. Commenting on his life, he said: “I have had a good run and have no regrets.” The family will receive friends at the Bosak Funeral Home, 453 Shippan Avenue in Stamford on Wednesday, January 15, 2014, from 4pm to 8pm. A funeral will be celebrated in the Sanctuary of the First Presbyterian Church, 1101 Bedford Street in Stamford on Thursday, January 16 at 11am, followed thereafter by burial at Fairfield Memorial Park, 230 Oaklawn Avenue, Stamford, CT. In lieu of flowers, please make a donation in his memory to the: Building Fund of the Stamford Hospital, Shelburne Road, at West Broad, Stamford, Connecticut.

Zolton Andrew Benyus, Sr. passed away peacefully on Thursday, January 9, 2014 after a short illness surrounded by his family and friends at home, as he had wished. He is survived by his son Ronald G. Benyus as well as his son Zolton A. Benyus,... View Obituary & Service Information

The family of Zoltan A Benyus Sr. created this Life Tributes page to make it easy to share your memories.