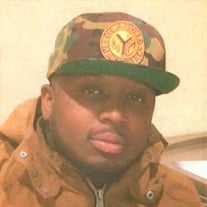 Jamel Kareem Sawyer aka “1stclassmel”- 29, earned his angel’s wings peacefully on February 27, 2020. His passing was untimely for all of us, but he fought as long and hard as he could. Despite his health challenges for the past 10 years, he remained positive and worked at making sure that everyone that was fortunate enough to be in his presence or touched by him was left smiling and feeling good about themselves. Jamel was born on April 3, 1990 to the late Melvin Sawyer Jr. and Darlene Leggette in Brooklyn, New York. He moved to Stamford, CT at the age of 5 to live with his big sister and set on a path to make everyone he met become a fan because of his energy and the awesome smile on his face. Mel attended Stamford Public Schools and was introduced to playing football by his brother-in-law at 8 years old. He also played Stamford Youth and AAU basketball, but by the time he got to Cloonan Middle School his passion for football began to take shape. Jamel went on to attend Stamford High School and was a Black Knight running back for 4 years. He then took his talents to Mount Ida College in Massachusetts meeting a new set of people who’s lives he continued to touch. At the age of 20, Jamel unfortunately would be dealt an unexpected blow by getting a staph infection that would paralyze him from the waist down. Living with the staph infection and learning to live in a wheelchair only knocked him down for a second. His love for music and the encouragement from his family and friends to pursue it introduced us to the creative genius that he was. Jamel released is first mixed tape under the artist name 1stclassmel in 2011. It was a soundtrack to his struggle that past year and a vow to keep working on his craft and celebrating life. Mel worked various retail jobs to help support him while he worked on his music. His latest EP – The Wave List was released in 2019 and is his final gift of his voice to us. Jamel is survived by his big sister Davida Lara and his brother-in-law Mark Lara that raised him. His sisters Kenyetta (Asiah) Lassiter (CT), Shavon Damon (PA), Takia Hall (GA), and Chapell Sawyer (PA), his brothers Quantrel Leggette (NY), Shamar Leggette (NY) and little brothers Darnell and Noel. He and Mark Brandon Lara grew up as brothers and their bond and collective creativeness with his music was amazing. He is also survived by his loving grandparents, aunts, uncles, cousins, nieces, nephews and beloved friends. Jamel was loved by many and will be missed. He was a singer, rapper, and song writer. He also convinced us that he was the “sexiest man in a wheelchair”. We will miss him always. Family will receive relatives and friends on Saturday, March 7th from 1pm to 2pm with a memorial service at 2pm, at Bosak Funeral Home, 453 Shippan Avenue, Stamford, CT. The family has entrusted the funeral arrangements to Bosak Funeral Home, 453 Shippan Avenue, in Stamford, CT. If you would like to leave a condolence message for the family you may visit the guestbook on bosakfuneralhome.com or on Facebook at facebook.com/bosakfuneralhome.

Jamel Kareem Sawyer aka &#8220;1stclassmel&#8221;- 29, earned his angel&#8217;s wings peacefully on February 27, 2020. His passing was untimely for all of us, but he fought as long and hard as he could. Despite his health challenges for the... View Obituary & Service Information

The family of Jamel Kareem Sawyer created this Life Tributes page to make it easy to share your memories.